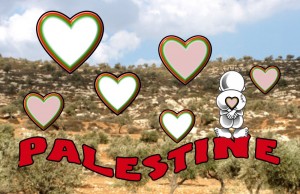 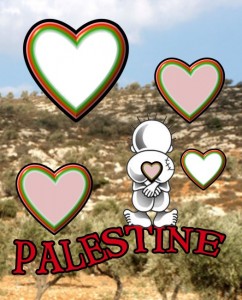 Watch videos of Palestinians in love who struggle to be together agaisnt Israel’s apartheid laws which discriminate against non-Jewish people and crush Palestinian rights everywhere. Don’t forget to join the Love Under Apartheid Facebook page.

Share your love and raise your voice especially with Khader Adnan, deprived of human rights under military detention without trial or charge and who is in his 58th day of a hunger strike to protest for Palestinian dignity. The Israeli military occupation “court” has denied his appeal. Hundreds of Palestinians have joined in solidarity with Khader’s hunger strike.

Though the life in his body hangs on by a thread, his spirit is unbroken.

“The Israeli occupation has gone to extremes against our people, especially prisoners,” Adnan wrote in a letter published through his lawyer, “I have been humiliated, beaten, and harassed by interrogators for no reason, and thus I swore to God I would fight the policy of administrative detention to which I and hundreds of my fellow prisoners fell prey.”

“As Israel continues in its audacious refusal to abide by international law so does Lebanon.”
Condemned to arbitrary detention without trial or charge, Khader Adnan continues to pursue Palestinian resistance to Israeli fascism through hunger strike. 58 days without food.
Khader Adnan and Israel’s use of administrative detention
Rightwing zionists attempting another troll to attract pre-election Christian zionist support in the US?
United Nations Special Rapporteur on the right to adequate housing, Raquel Rolnik describes this aspect of Israeli apartheid: “In very different legal and geographical contexts, from the Galilee and the Negev to East Jerusalem and the West Bank, the Israeli authorities promote a territorial development model that excludes, discriminates against and displaces minorities, particularly affecting Palestinian communities.”
A swing in Australia toward Palestine? when will the opinion polls ask better questions, like “Do you think Israel should be prosecuted in the ICC for its apartheid, colonialism and collective punishment”?
Zionist hasbara collides: NGO Monitor collectively punishes antisemitic Danny Ayalon in conjunction with the UN
Roger Cohen emphasises Beinart’s flawed, antisemitic thesis of “Jewish power” – this is a bait and switch by the zionist ruling class
Illiterate hasbaroid zionists cam’t tolerate Mahmoud Darwish and Habiby, condemn them as propaganda for BDS
Another day of 64 years of foul Israeli war crimes and crimes against humanity, committed with impunity thanks to the US/UK/Australia/Canada: Twenty Israeli military vehicles descend on village south of Hebron, demolish 22 buildings, displace 120 Palestinians
The apartheid entity victimises Palestinian children : Israeli Bulldozers Destroy Playground in Silwan – International Middle East Media Center
Recognising Israel’s appalling crimes of apartheid and colonialism, US academics declare their support for BDS
Better late than never? a bit late to the crime scene : IMF warns Israel over Arab, Haredi Jew poverty

“Why is the United States supporting the Bahraini police with tear gas and with weapons? You know, we want basic freedoms such as the ones that you have in the United States. And, you know, why is your government not acknowledging that?”
Al-Akhbar contributor Austin Mackell freed, recalls screams of torture in Egypt