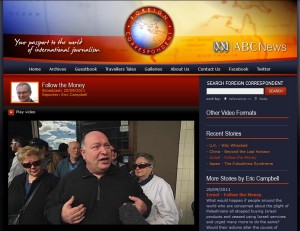 On the 20th September, Australian ABC TV’s Foreign Correspondent broadcast a programme titled “Follow the Money”, mainly focussing on the impact of BDS on Daniel Birnbaum, the Israeli US immigrant business owner of Soda Stream, an Israeli factory illegally located in one of the neoliberal industrial zones in the Occupied West Bank. The show offered a token ‘balance’ with a Palestinian US immigrant family who supported boycott, divestment and sanctions of Israeli apartheid and occupation. The mother, Cairo Arafat, emphasised her support for two states, whilst her daughter Semma, was less enthusiastic, opining that “Two states will not work. Two states would just be a phase into Palestine being wiped off the map, into creating a one state that is an Israeli state”. The programme lacked considerable depth and sensitivity on the BDS issue within Palestine and Israel, and made some glaring factual errors – such as failing to note that Israel’s occupation of the West Bank is illegal under international law, that instead of “Thirteen per cent of it [the apartheid wall] … being constructed inside the West Bank”, the apartheid barrier is built mainly in the West Bank and only partly along the 1949 Armistice line, or “Green Line” between Israel and Palestinian West Bank, with 12% of the entire West Bank area illegally annexed across into the Israel side of the barrier. Further, despite the new anti-boycott law passed by Israel’s far right extremist Knesset, which has been condemned by Amnesty International as “an attack on freedom of expression”, there are a growing number of Israelis who are in solidarity with the call of Palestinian people for BDS.

Foreign Correspondent programmes are re-broadcast regularly “by more than 20 international networks, including CNN International, Al Jazeera, NHK Japan and TV NZ”. Al Jazeera English re-broadcasted “Follow the Money” retitled as “About a boycott” on its “People & Power” show on October 6, 2011. So who inserted the ubiquitous fake Max Brenner this time – for this is not the first occasion that Max Brenner has been anthropomorphised. 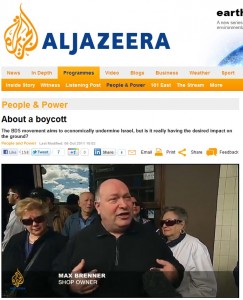 The “Max Brenner Shop Owner” title pops up in the screenshot opposite at about 10.07 minutes into Al Jazeera English’s slightly truncated re-broadcast version. This individual is named in the Foreign Correspondent transcript as “GRAHAM WEINBERG (IN CROWD)”. Now we know which balding lookalike Max Brenner is this month. The Max Brenner site states “ALL AUSTRALIAN MAX BRENNER CHOCOLATE BARS ARE COMPANY OWNED & WE DO NOT CURRENTLY FRANCHISE”.

Foreign Correspondent Eric Campbell captures some correct information from a protester at a recent rally against the Israeli occupation-supporting Max Brenner business in Newtown.

PROTESTOR: “Max Brenner is financially and morally supporting the Israeli defence forces, particularly two brigades – the Golani and the Givati”.

Like Max Brenner, Sodastream is bound to the illegal, brutal Israeli military occupation, and is a legitimate boycott target.

Al Jazeera made an appearance in some recently released WikiLeaks cables.

“Al Jazeera is a vital component to the USG’s strategy in communicating with the Arab world.” — Joseph E. LeBaron, U.S. Ambassador to Qatar, November 6, 2008

Might the omnipresent bald man be such an example of ‘creative uses’ of Al Jazeera’s airwaves by the US or was the inserted caption a plausibly deniable slipup?

You may well ask: “Why direct action? Why sit ins, marches and so forth? Isn’t negotiation a better path?” You are quite right in calling for negotiation. Indeed, this is the very purpose of direct action. Nonviolent direct action seeks to create such a crisis and foster such a tension that a community which has constantly refused to negotiate is forced to confront the issue. It seeks so to dramatize the issue that it can no longer be ignored. My citing the creation of tension as part of the work of the nonviolent resister may sound rather shocking. But I must confess that I am not afraid of the word “tension.” I have earnestly opposed violent tension, but there is a type of constructive, nonviolent tension which is necessary for growth. Just as Socrates felt that it was necessary to create a tension in the mind so that individuals could rise from the bondage of myths and half truths to the unfettered realm of creative analysis and objective appraisal, so must we see the need for nonviolent gadflies to create the kind of tension in society that will help men rise from the dark depths of prejudice and racism to the majestic heights of understanding and brotherhood. The purpose of our direct action program is to create a situation so crisis packed that it will inevitably open the door to negotiation.

The hand of a thief: Taking a page from Nixon (“If the president does it, that means it’s not illegal!”) Netanyahu instructed Justice Minister Ya’acov Ne’eman, a religious ultra-nationalist, to come up with a legal way for Israel to keep even the radical hilltop settlement outposts built on land that Israel itself recognizes as being owned by Palestinians.

Next come the micro-drones to zap anyone with soma who says nasty things about neoziocons. Government Aims to Build a ‘Data Eye in the Sky’
Here Comes FIATtackWatch: Ben “Big Brother” Bernanke Goes Watergate, Prepares To Eavesdrop On Everything Mentioning The Fed