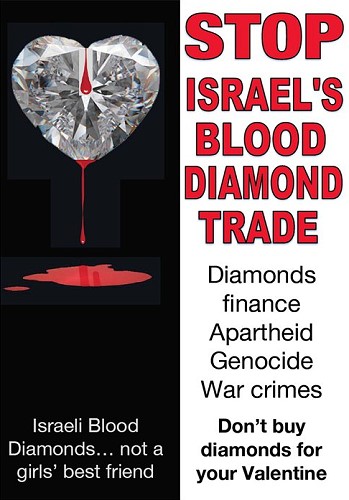 Act for justice today – donate a minute of your time and add your voice to the principled campaign against Israeli conflict diamonds. Please sign the petition and help end 63 years of Israeli human rights violations!

Diamonds processed in Israel fund war crimes and crimes against humanity yet they are sold worldwide as conflict free diamonds.

Israel is the world’s leading diamond exporter, with exports valued at nearly $20 billion in 2008, accounting for over 30% of Israel’s exports. Revenue from the Israeli diamond industry generates approximately $1 billion annually in funding for the Israeli military/security industry, a military which stands accused of war crimes and crimes against humanity.

According to the UN based Kimberley Process Certification Scheme (KPCS) only “rough diamonds used by rebel movements or their allies to finance conflict aimed at undermining legitimate governments” can be classed as conflict or blood diamonds. The KPCS classifies all other diamonds as “conflict free” regardless of what human rights violations they may be funding. Approximately 50% of all gem-quality diamonds in dollar terms are processed in Israel. Diamonds from Israel finance war crimes and crimes against humanity in Palestine yet they are sold worldwide as conflict free diamonds to unsuspecting consumers.

Israel’s total diamond imports in 2008 were va…lued at $9.7 billion. This figure includes rough diamonds and cut & polished diamonds that were returned – not sold.

Subtracting the KP value ($5.4) of Israel’s rough diamond imports from the total (rough +polished) import figure of $9.7 billion we get the value of cut & polished diamond returns – $4.3 billion

Subtracting this $4.3 billion of returns from the Israel’s total polished diamond exports of $15.2 billion gives the actual value of polished diamonds exported – $10.9 billion in 2008.

Finally from this $10.9 we abstract the value of the net rough diamond imports 1.2 billion to get the net value of Israel’s diamond exports in 2008 = $9.7 billion dollars.

The added value to the Israeli economy from the diamond industry in 2008 was $9.7 billion.

The point I’m making here is that even the net value of Israel’s diamond exports is significantly greater than the gross value of it’s second most important export commodity.

‘The WDC fails to mention that the much more lucrative, high-value end of the diamond industry is the main artery of the Israeli economy, accounting for more than 30 percent of Israel’s total manufacturing expo…rts worth nearly $20 billion in 2008 (“Trade Performance HS: Exports of Israel” accessed 25 March 2010) (See Figures 3 and 4). By comparison, the budget for Israel’s Ministry of Defense was $16 billion in 2008.’