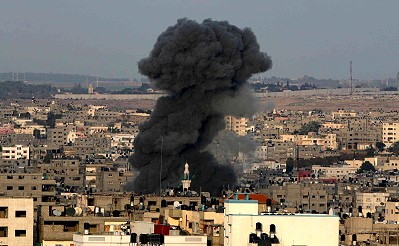 Crimes committed against children by Israel and Palestinian militant groups are highlighted by the UN.

Jerusalem, 6 February 2009 – “Despite the Gaza ceasefires, children continue to suffer and remain in a precarious state of insecurity”, stated Ms. Radhika Coomaraswamy, Special Representative for Children and Armed Conflict, after her four-day visit to the occupied Palestinian territory and southern Israel. She was in the region to assess first hand the situation of children.

In Gaza, where 56% of the population is below 18 years old, grave violations against children were committed such as killing and maiming, and denial of humanitarian access. During the recent hostilities, there were no safe spaces for children and the crossings out of Gaza were, and remain, virtually sealed.

One third of Palestinian casualties are reported to be children. Many children have witnessed unspeakable violence against their family members and are severely distressed. The extensive destruction to homes, hospitals, schools and power, water and sanitation networks also has a devastating impact on children. The damage or destruction of hospitals and schools including the American International School, Palestinian Authority-administered, and UNRWA schools – considered protected spaces — was particularly shocking. “Reconstructing the schools and ensuring that children can go back to their classrooms and feel secure again is essential to their recovery,” said Ms. Coomaraswamy.

“There is no doubt that children live in constant fear of missile attacks in Southern Israel. The need for psycho-social support has increased recently,” she said on her visit to Ashkelon. “The indiscriminate firing of rockets into civilian areas is clearly a grave violation of international humanitarian law and should not be neglected simply because they are lower in scale”, she added. The Special Representative urged Hamas and other affiliated groups to immediately stop the rocket attacks on Israel, stating that this only feeds the cycle of violence.

In both Gaza and southern Israel, children expressed anger and despair as a manifestation of their desire for accountability. It is imperative that independent and impartial investigations are conducted and justice is done. The lack of accountability only contributes to a sense of impunity. “The children want answers and the international community must deliver”, declared the Special Representative.

Children in Gaza are in urgent need of humanitarian assistance, including the restoration of basic services and the immediate reconstruction of schools and hospitals. “Rehabilitation services for the disabled and psycho-social support programs for the tens of thousands in distress are critical. Education is a basic right, an emergency need and a development imperative. It must be prioritized in any emergency response,” said the Special Representative.

Ms. Coomaraswamy reiterated calls by the international community for Israel to open all crossings for regular, sufficient and facilitated humanitarian access and said the amount and kinds of supplies allowed into Gaza must be significantly expanded for any real improvement to occur. The Special Representative emphasized that humanitarian agencies must not be hampered in assisting the population and their workers authorized easy access into Gaza. The Special Representative stated that Hamas must respect that humanitarian aid cannot be diverted.

“Even though they bear the brunt of the conflict, children remain strong advocates for peace,” said Ms. Coomaraswamy. “Every child has the right to live in safety and security. Children from the region have suffered enough. They deserve a better future,” she concluded. 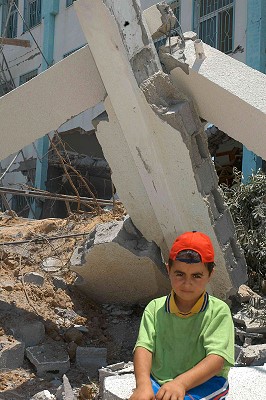 NEW YORK, USA, 5 February 2008 – The UN Secretary-General’s Special Representative for Children and Armed Conflict, Radhika Coomaraswamy, is in Gaza and southern Israel this week to assess the situation of children and advocate for their protection.

In Gaza, Ms. Coomaraswamy, accompanied by a team from UNICEF, visited a community centre, a school and a hospital – all in the north, in and around Gaza City. She repeated calls for the territory’s borders to be opened and access by humanitarian aid organizations to be expanded.

“The children want answers and the international community must deliver,” declared Ms. Coomaraswamy.

Losses on both sides

During her four-day stay in the region Ms. Coomaraswamy also met with residents in the Israeli town of Ashkelon, which suffered from rocket attacks fired from Gaza.

She said that children on both sides of the border had expressed anger, despair and a need for accountability.

At a school that Ms. Coomaraswamy visited in Zaitoun, a neighborhood east of Gaza City, Almaza Hilmi Al Samuni, 13, was attending a counselling session held by a UNICEF partner organization, the Palestinian Centre for Democracy and Conflict Resolution. Almaza said she wanted the Special Representative to meet the children who, like herself, had lost their mothers.

“They died right before my eyes. There was nothing I could do to save them,” she said of her family members.

Ms. Coomaraswamy noted that Israeli children were also still living in fear, and called for an end to the indiscriminate firing of rockets into civilian areas.

Education as a basic right

In Beit Lahiya, Gaza, Ms. Coomaraswamy visited the Omar Ben Al-Kathab school – which is now operating on double shifts to accommodate an additional 400 students from a nearby school that sustained heavy damage in the recent violence.

More than 160 schools across Gaza were damaged during the conflict. All UN Relief and Works Agency schools were reopened on 24 January after being closed for a month.

“Reconstructing the schools and ensuring that children can go back to their classrooms and feel secure again is essential to their recovery,” said Ms. Coomaraswamy. “Education is a basic right, an emergency need and a development imperative. It must be prioritized in any emergency response.”

UNICEF is providing essential education equipment and materials, including School-in-a-Box kits, pens, pencils and exercise books, recreational kits, and math and science kits for children in all six districts of Gaza.

Even before the recent conflict, the children of Gaza suffered from years of conflict, blockade, lack of adequate social services, and poverty. Coping mechanisms of communities had already been eroded prior to the conflict. Access to basic needs and the creation of a sense of security and a safe environment is essential for the well-being of children.

“UNICEF is calling for regular, sufficient and facilitated access of humanitarian goods and aid workers into Gaza,” said UNICEF’s Representative in the Occupied Palestinian Territory, Patricia McPhillips, who accompanied Ms. Coomaraswamy during the mission. “This includes educational and recreational supplies … to provide a sense of normalcy for children who have experienced severe levels of distress.”

The Special Representative is mandated by the UN General Assembly as an independent advocate for children in armed conflict. UNICEF is a leading member of the international coordination group working to monitor and report on grave violations of child rights in conflict situations.

Anthony Cordesman from the Centre for Strategic & International Studies releases a draft report claiming no war crimes were committed by Israel in Gaza. His report is sourced mainly from IDF and other Israeli sources and ignores political factors leading up to the conflict including the two year siege on Gaza and the 60 year history of Israeli brutality and occupation.