With George Mitchell, negotiator extraordinaire arriving in the region on Wednesday, preliminary manouevrings have commenced. 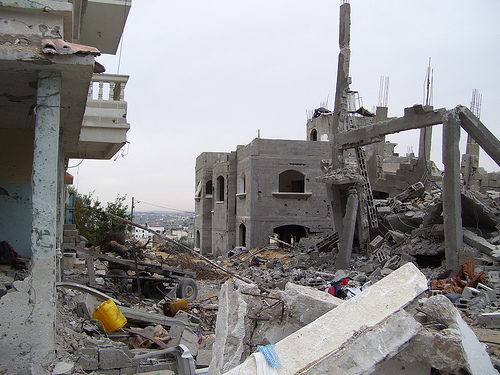 Beit Lahiya in the far north of the Gaza Strip was badly hit during the Israeli attacks. This image shows some of the aftermath in a residential area.
– Photo & text courtesy of Rafahkid

Hamas and other Palestinian factions are set to hold talks in Cairo with Egyptian and European mediators to cement the ceasefires in the Gaza Strip and Israel.

They are also seeking to secure a deal to re-open the border crossings into Gaza and end Israel’s 18-month economic blockade of the strip, which it says is a necessary measure to combat weapon smuggling.

The fate of Gilad Schalit, an Israeli soldier captured by Palestinian fighters in June 2006, was also reported to be on the meeting’s agenda.

Tipsy Livni has linked Schalit’s release to border openings, whereas Hamas has expressed interest in the release of Palestinian prisoners – now might be a very good time for democratically elected Hamas parliamentarians, 41 of them, to be released.

Abu Shahla, a supporter of Fatah, urged reconciliation between the two parties, saying anything less would be to ignore the will of ordinary Palestinians.

“The people of Gaza sent a message to politicians: we want you to be unified, and to have unity. Any talk about the sake or benefit of Hamas or Fatah is [a] failure, and not representative of the people,” he said.

Ghazi Hamad, the former spokesman for Hamas leader Ismail Haniya, joined the renewed calls for unity, saying it was “a disaster” that Fatah and Hamas remained divided.

“We have to sit together, to talk together, in order to face the Israeli plan in our land,” he said.

“This is very important, because the main conflict is not between Fatah and Hamas, it is between Palestinians and Israel.”

How far will Hamas go to achieve the appearance of unity? Israel’s massacre has strengthened it’s image on the West Bank as well as Gaza. While Abbas’ term expired on the 9th January, Ismail Haniya remains legitimate.

Mitchell may offer the best chance Palestinians have ever had to achieve land rights in decades. A united front will also appeal to Arabs and rulers throughout the Middle East. How will Mitchell manage, if his peace process is to be akin to that used in Northern Ireland, to bring the political wing of Hamas in ‘from the cold’ to sit at the negotiating table with Israelis who have no real intent for peace? Will Israel attempt to sabotage the process and how?

International monitors at Gaza’s borders,as suggested by Hamas, would seem to be urgent and wise at this juncture.

Gabrielle Rifkind: The man to sell peace to the Middle East

Key to the negotiations in Northern Ireland was the establishment of a standing conference. The parties met three days a week for seven years. Such a structure is just as necessary in this conflict, but a tighter time-frame is needed. This would have to be done in consultation with all those involved. Time is running out, and any long-term horizon would make all the parties despair. The international community has a responsibility to put this framework for talks in place. A long-term ceasefire needs to be negotiated before the talks both in the West Bank and Gaza, and the presence of international troops may be necessary on the borders.

In Northern Ireland, economic regeneration was central to ending the conflict and ensuring long-term stability. A smart move by the international community would be to actively support the rebuilding of Gaza as a model Islamic state. A failed state on Israel’s border spells grave danger for the whole region. Turkey has demonstrated an active and positive role in this recent round of fighting, and has the capacity to work closely with Hamas. It could play a critical third-party role in Gaza’s reconstruction.

This recent war has made the atmosphere more toxic, bankrupted the peace process and exacerbated the climate of hatred. But with the appointment of Mitchell, at last the peace process may be in good hands. The crucial question is whether his skills will cajole the Israelis to participate and make them understand that their security will depend on the security and prosperity of their neighbours – a far cry from the current devastation in Gaza.

Ayman Taha, a Hamas official, said in Cairo that his delegation was briefed by the Egyptians on an Israeli proposal for an 18-month truce with only a partial opening of the border, which they rejected.

Instead, Mr Taha said the group made a counter offer of a year with open borders, which they now must discuss with their leadership in Damascus.

“We will study the matter again and it will be brought back to the Egyptians,” he said.

Gaza’s borders are its lifeblood as it is dependent on the outside world for almost all of its services.

A former US diplomat and adviser to Mr Obama said that any efforts to sideline Hamas – a radical Islamic organisation that refuses to recognise Israel’s right to exist – by concentrating on mainstream Palestinian factions were doomed.

“That doesn’t necessarily mean you have to start a direct dialogue with Hamas, but you have to think about how to deal with this question in a more intelligent way, by using all political and diplomatic instruments.”

“I ask the European Union to do (things) very, very quickly to rebuild to help the Palestinians to get out of this crisis,” Egyptian Foreign Minister Ahmed Aboul Gheit said before talks with European and Palestinian counterparts.

“We need to force the Israelis to negotiate and also tell them to open crossings and to give Palestinians a chance to live in a normal way,” he told reporters.

The EU has said it is ready to reactivate and expand a mission launched in 2005 to monitor the Rafah crossing between Gaza and Egypt, but says agreement on that is hampered by the split between Hamas and President Mahmoud Abbas’s rival Fatah, which lost control of Gaza to Hamas amid fighting in 2007.

“The reunification of the Palestinians under the recognised and cherished voice of President Abbas is so important,” said British Foreign Secretary David Miliband.

“When this government of consensus does not come about, I do not know how we can get out of this vicious circle,” he added of the repeated failure of efforts to solve the Israeli-Palestinian conflict.

France is sending a naval mission to the region to pre-empt arms supplies coming into Gaza, and there are discussions among EU states about the possibility of a further maritime mission in the Red Sea.

However, officials say they do not expect concrete decisions to emerge from Sunday’s discussions, which also involve Turkey and Jordan.

Hamas Monday rejected an Israeli offer that linked the opening of Gaza’s border crossings to the release of kidnapped soldier Gilad Shalit. Hamas spokesman Fawzi Barhoum told Haaretz that under no circumstances would the organization accept such a linkage. First, Israel must open the crossings, he said; then the parties can talk about Shalit.

A senior Hamas official in the Gaza Strip, Ayman Taha, told the Egyptian paper Al-Ahram that Israel had offered to free 1,000 Palestinian prisoners and open the crossings in exchange for a cease-fire and Shalit’s release. The Lebanese paper Al-Sharq Al-Awsat, citing Israeli sources, said the offer was for 1,050 prisoners, including 280 of the 350 senior terrorists whose release Hamas has demanded by name. Prior to the Gaza operation, Israel had agreed to release only some 220 people on this list.

In practice, the talks have been stalled in any case by a dispute between Hamas and Egypt, the chief mediator, over the former’s rejection of the latter’s proposals for a Fatah-Hamas reconciliation and a long-term truce with Israel. And defense sources said it was “not certain” that the figures given by the Arab newspapers would indeed be the final formula.
Advertisement
If it is, however, the deal will provide Hamas with significant gains. The organization’s main rationale for ending its last truce with Israel, in December, was to end Israel’s blockade of Gaza, so Israel’s offer allows Hamas to achieve the primary goal for which it went to war.

Additionally, Hamas would receive a massive prisoner release, including many of the people it specifically demanded. It would thereby have bested the Fatah-led Palestinian Authority in terms of both the number and the “quality” of the prisoners whose freedom it was able to secure. While Israel has released prisoners to the PA several times in recent years, it has always decided whom to release, rejecting any input from the PA.

Finally, the prisoner release, coupled with the reopened border crossings, would essentially constitute de facto Israeli recognition of “Hamastan,” since it would bolster Hamas’ grip on Gaza by giving it the image of a winner. It would also boost Hamas’ popularity in the West Bank. Effectively, therefore, it would constitute an Israeli recognition that its three-year-old effort to topple Hamas has failed.