Speaking of hasbara, Regev appears to need a serious brush up course if he thinks the world will find his latest rubbish plausible.

One of my favourite in situ hasbara debunkers, Gideon Levy is characteristically scathing about the choice of political candidates offered to Israeli voters in their forthcoming Feb 10 elections. 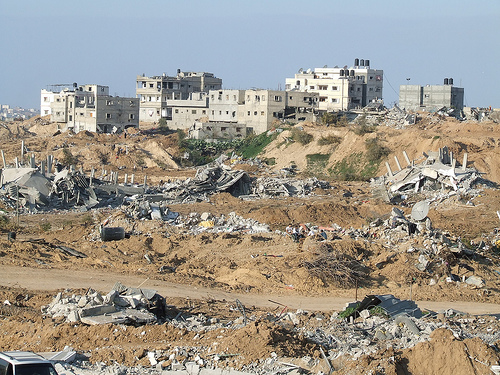 Earlier this week, following the withdrawal of Israeli troops from the Gaza Strip, residents returned to some of the areas which had become no-go zones during the attacks, such as Jabalia just outside Gaza City. On Tuesday 20th January, ISM Gaza Strip volunteers joined a university professor as he visited his house in the east of Jabalia. We were shown from room to room around the bombed-out shell of what had once been a beautiful home. When asked if he and his family would continue to live there, he replied calmly that it was their right to and that they would never leave their land.

As we made our way up the hill through the orange grove beyond the professor’s house, we encountered evidence of where tanks had been positioned – churned up ground, tank tracks, uprooted olive trees. At the top of the hill, from where the Green Line was clearly visible, we began to see homes which had been totally destroyed, several stories concertinaed. Families sat together on the rubble of their homes. Children collected firewood from the dismembered limbs of fruit trees.

At first it seemed as though it was ‘just’ a cluster of ten or fifteen destroyed houses, which would have been bad enough in its own right. However, as we continued walking it became apparent that the devastation extended into the next street and the next, more and more destroyed and damaged homes following one another. This entire neighbourhood on this easternmost edge of Jabalia had been virtually wiped off the face of the earth. It resembled the site of some massive natural disaster. However this ground zero was entirely man-made.

The gouged-out windows of some of the homes still standing were filled with dark green sand bags. This was a sign these houses had been used by the Israelis as sniper positions. One could barely imagine how the situation must have been in this neighbourhood when it was under attack.

We met a blind woman who had been held prisoner for 11 days in one room of her home, along with a paralysed man, whilst Israeli soldiers used it as a base. Terrified and expecting to be killed at any time, they were given water twice during their ordeal. When the Red Crescent evacuated them, the woman said she could finally breathe for the first time since the soldiers arrived. The walls had been daubed with Hebrew graffiti, empty plastic food trays were strewn around and the stairway stank of urine.

In the wake of a Gazan holocaust, thousands of people are finding themselves in truly desperate situations. A traumatized but resilient population is somehow beginning to pick up the pieces. Merely continuing to exist is a form of resistance.

This war unmasked Livni, the woman who had promised us “different politics.” She, who as foreign minister was supposed to show Israel’s sunny side to the world, chose to present an arrogant, violent and brutal face. During the war she boasted that Israel was acting “savagely,” threatened to let Hamas “have it” and announced that the cease-fire would come into effect “whenever Israel decides.”

As far as she was concerned, there was no world, no United States and Europe, no UN Security Council, and no bleeding and defeated other side – only Israel will decide. No foreign minister has ever spoken like this before.

In her pathetic attempts to assume a masculine, militaristic, even macho, posture of someone who would know what to say if the telephone rang at 3 A.M., Livni was exposed as a failed foreign minister, whose words and deeds are no different from those espoused by the radical militaristic men around her. No self-respecting voter who considers himself an upstanding centrist could vote for her. Whoever votes for Kadima will be voting for the right, which is eager to embark on any war and risk the accompanying crimes.

Voting for Labor also means voting for the war and its horrors. This war’s marshal, Ehud Barak, has forever deprived himself of the moral right to talk of coexistence, political arrangements and diplomacy. If he really believed in them, he would have given them a chance before going to war, not afterward. Barak took the army to war and Barak must pay for it, together with his “left-wing” party, which joined the most radical, far-right parties in supporting the move to outlaw Israel’s Arab parties.

Avigdor Lieberman, Netanyahu, Livni and Barak are one – they all voted in support of an undemocratic decision. And don’t be alarmed by Lieberman – he, too, only talks. But at least he does so honestly, while Barak fires off salvos and deceives.

Granted, these impostors still enjoy the support of world leaders, but for many people around the globe, they have become war-mongers and suspected war criminals. Their diplomatic immunity will protect them – but who wants those leaders, with their bloodied hands, to represent us?

No less severe is the fact that there are no ideological differences between the candidates. Let Barak and Livni step up and explain what the hell sets them apart. What ideological argument are they conducting, apart from bickering on who should be credited for the war?

Facing them is Netanyahu – what does he have to offer? “Economic peace.” After this war, which wasn’t enough as far as he is concerned, his doctrine sounds even more ludicrous than ever.

This is how we’re going into elections – with three leading parties that are hardly different from each other.

We always used to say, “There aren’t any moderates in the Arab world.” Now we are the ones who don’t have any. Vote as you will, but don’t fool yourself. Every ballot cast for Kadima, Labor and Likud is an endorsement of the last war and a vote for the next one.

Who are the *real* terrorists again?