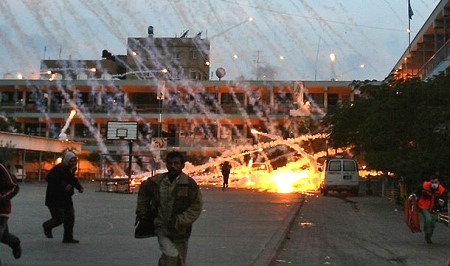 Israel received stern words from UN leader Ban Ki Moon who was outraged at the firing on the UN at Beit Lahia.

“I have seen only a fraction of the destruction. This is shocking and alarming,” Ban said, condemning an “excessive use” of force by Israel as well as Hamas’s rocket fire into Israel.

“These are heartbreaking scenes I have seen and I am deeply grieved by what I have seen today,” he told a news conference held against a backdrop of still smoldering food aid in a U.N. warehouse set ablaze by Israeli gunfire last Thursday.

Ban particularly deplored the attack on the UN warehouse:

“It is particularly significant for a secretary-general of the UN to stand in front of this bomb site of the UN compound,” he said.

“I am just appalled and not able to describe how I am feeling having seen this … it’s an outrageous and totally unacceptable attack against the UN. I have protested many times, and I protest again in the strongest terms.”

Ban called for a “full investigation” into the incident to make those responsible for the attack “accountable”.

Despite UN demands, Israel is not allowing supplies with construction materials through, only food and medicine aid – is this a sign that their immoral collective punishment of Gaza’s civilian population is not yet over?

The Israeli exclusivist war machine has destroyed more than 4,000 buildings with over 20,000 severely damaged.
50,000 Gazans have been made homeless due to Israel’s aggression and 400,000 people are without running water.

@AJGaza The Israeli army says its troops have completed their pull-out from the #Gaza Strip.

Significant to Palestinian aspirations, in his inauguration speech Obama said:

“To the Muslim world, we seek a new way forward, based on mutual interest and mutual respect.

“To those leaders around the globe who seek to sow conflict, or blame their society’s ills on the West – know that your people will judge you on what you can build, not what you destroy.”

Let’s hope the Stalinist reprobates in the Israeli Knesset heed his advice.

While Ban calls for national unity between Palestinian groups, Hamas supporters are retaining the power of their democratic vote and are demanding UN recognition –

“The Hamas government was elected by popular vote,” one said. “We demand an end to double standards.”

The United Nations, with other key mediators in the Middle East, say they will only deal with Hamas if it recognizes Israel, renounces violence and accepts interim peace deals. 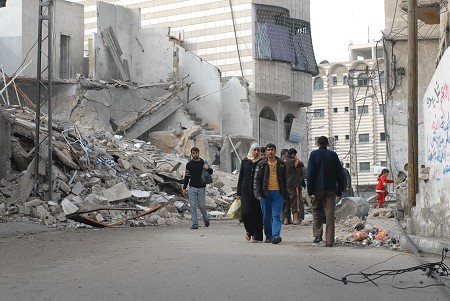 Chances of recognition of the fascist Occupier entity are likely to be non-existent at this point, with 1350 dead and around 5000 people injured from Israel’s unprovoded attack on Gaza. With Israel’s timed withdrawal from Gaza, Hamas is claiming victory.

In blind stupidity and arrogance, the majority of Israelis believe the murder of innocent Palestinians and destruction of their dwellings and public buildings is a legitimate and necessary accompaniment to their government’s attempt to topple the democratically elected Hamas government and right wing Netanyahoo is leading in the electoral polls. Zionism however thrives on hatred and the illegitimate attack and murder by Israel is bound to increase animosity toward the oppressor.

The election of this expansionist hardline ethnic cleanser could prove disastrous for Palestinians – again. Akiva Eldar provides some interesting speculation on imminent change in US policy toward Israel:

Obama is surrounded by Jewish advisers who are very familiar with Israeli tricks and stalling tactics, especially when it comes to the settlements (have we mentioned “natural growth” yet?), but they would still want the new president to adopt the tradition of the “special relationship” with the Jewish state. Obama, however, has also been exposed to the school of thought, existing in both the administration and the American think tanks, that argues that the excessive closeness between the U.S. and Israel undermines America’s strategic interests in the Arab world.

Brent Scowcroft, one of the shapers of foreign policy under President George H.W. Bush, and according to Time magazine, a strong influence on Obama, has called for a fundamental restructuring of American policy in the Middle East. Scowcroft, who was the boss of the current (and incoming) defense secretary Robert Gates, and a friend of the new national security adviser, James Jones, is proposing that the “special relationship” be adjusted to a “natural relationship.” Perhaps such a change would be able to transform celebratory ceremonies into dry agreements.

How will AIPAC and the other gungho Jewish benefactors to US politicians react if Obama does alter US policy to Israel?

The Zionist enterprise’s military wing, the IDF, is investigating a reserve paratroop unit’s use of phosphorus shells in the incident.

According to senior army officers, the IDF used two phosphorus-based weapons in Gaza. One, the sources said, actually contains almost no phosphorus. These are simple smoke bombs – 155mm artillery shells – with a trace of phosphorus to ignite them.

Alkalai’s probe is thus focusing on the second type: phosphorus shells, either 81mm or 120mm, that are fired from mortar guns. About 200 such shells were fired during the recent fighting, and of these, according to the probe’s initial findings, almost 180 were fired at orchards in which gunmen and rocket-launching crews were taking cover.

The one problematic incident was the reserve paratroops brigade that fired about 20 such shells in a built-up area of Beit Lahiya. Many international organizations say phosphorus shells should not be used in heavily populated areas. The brigade’s officers, however, say the shells were fired only at places that had been positively identified as sources of enemy fire.

The 120mm shells, a recent acquisition, have a computerized targeting system attached to a GPS. Brigade commanders say they were very effective, but they were also responsible for two very serious mishaps: a strike on a UNRWA school that killed 42 Palestinians and a friendly fire incident that seriously wounded two officers.

Expect a duck and weave coverup – why were the shells authorised to be used in the first place at all?

Amnesty and Human Rights Watch have condemned the Israeli actions as war crimes:

Human rights group Amnesty International has accused Israel of war crimes, saying its use of white phosphorus munitions in densely populated areas of the Gaza Strip was indiscriminate and illegal.

The accusations from the London-based organisation came as the scale of the destruction caused by the Israeli assault on the Palestinian territory overwhelmed Gazans.

Amnesty is not the first group to accuse Israel of using white phosphorus.

Human Rights Watch made the accusation on January 10 and the UN has also said Israel used the munition during its offensive in Gaza.

Donatella Rovera, a researcher with Amnesty, said: “Such extensive use of this weapon in Gaza’s densely populated residential neighbourhoods is inherently indiscriminate.”

“Its repeated use in this manner, despite evidence of its indiscriminate effects and its toll on civilians, is a war crime,” she said.

Attorneys on behalf of Belgian and French nationals with relatives who were either wounded or killed in Gaza have petitioned a Belgian court to arrest Tipsy Livni for war crimes when she visits Brussels tomorrow.

In other war crimes news, there’s a new Israeli site listing the prospective war criminals and their misdeeds.

It also explains how to inform the International Criminal Court in The Hague of when the “suspects” are outside Israel, and hence vulnerable to arrest.

The first sign of hope and justice from Obama comes from the announcement that he has “ordered the U.S. government to suspend prosecutions of prisoners at Guantanamo Bay for 120 days.”

Israel must be judged at the International Criminal Court – Sign the Universal petition.

Francis A. Boyle called for an International War Crimes Tribunal three days after the commencement of Israel’s disgraceful slaughter.

The purpose of the ICTI would be to investigate and prosecute Israeli war crimes, crimes against humanity and genocide against the Peoples of Lebanon and Palestine–just as the ICTY did for the victims of international crimes committed by Serbia and the Milosevic Regime throughout the Balkans.

The establishment of ICTI would provide some small degree of justice to the victims of Israeli war crimes, crimes against humanity and genocide against the Peoples of Lebanon and Palestine–just as the ICTY has done in the Balkans. Furthermore, the establishment of ICTI by the U.N. General Assembly would serve as a deterrent effect upon Israeli leaders such as Prime Minister Olmert, Foreign Minister Livni, Defense Minister Barak , Chief of Staff Ashkenazi and Israel’s other top generals that they will be prosecuted for their further infliction of international crimes upon the Lebanese and the Palestinians.

Without such a deterrent, Israel might be emboldened to attack Syria with the full support of the Likhudnik Bush Jr. Neoconservatives, who have always viewed Syria as “low-hanging fruit” ready to be taken out by means of their joint aggression. If Israel attacks Syria as it did when it invaded Lebanon in 1982, Iran has vowed to come to Syria’s defense.

And of course Israel and the Bush Jr administration very much want a pretext to attack Iran. This scenario could readily degenerate into World War III.

For the U.N. General Assembly to establish ICTI could stop the further development of this momentum towards a regional if not global catastrophe.

The US GIVES free fuel to the Israeli military worth $1.1b since 2004

Israel wanted a humanitarian crisis – Targeting civilians was a deliberate part of this bid to humiliate Hamas and the Palestinians, and pulverise Gaza into chaos

In a desperate attempt to prevent their war criminals from being prosecuted, the IDF is censoring the names of battalion commanders involved in the attack on Gaza.

The IDF has also taken preliminary steps to defend military officers against legal charges abroad stemming from their involvement in Operation Cast Lead. The full names of battalion commanders involved in the fighting will be censored to prevent Israeli and international left-wing activists from attempting to try them for war crimes. The names of more senior officers cannot be redacted as their involvement and names have been reported by many media outlets.

Robert Fisk: So, I asked the UN secretary general, isn’t it time for a war crimes tribunal?