It seemed that Israel wanted to teach me, and more significantly, the UN a lesson: there will be no cooperation with those who make strong criticisms of Israel’s occupation policy. After being denied entry, I was put in a holding room with about 20 others experiencing entry problems. At this point, I was treated not as a UN representative, but as some sort of security threat, subjected to an inch-by-inch body search and the most meticulous luggage inspection I have ever witnessed.

I was separated from my two UN companions who were allowed to enter Israel and taken to the airport detention facility a mile or so away. I was required to put all my bags and cell phone in a room and taken to a locked tiny room that smelled of urine and filth. It contained five other detainees and was an unwelcome invitation to claustrophobia. I spent the next 15 hours so confined, which amounted to a cram course on the miseries of prison life, including dirty sheets, inedible food and lights that were too bright or darkness controlled from the guard office.

“The Israeli airstrikes on the Gaza Strip represent severe and massive violations of international humanitarian law as defined in the Geneva Conventions, both in regard to the obligations of an Occupying Power and in the requirements of the laws of war.” – Israel’s War Crimes, by Richard Falk

Invasion of Gaza may be imminent, with propaganda leaflets dropped in northern Gaza warning people to leave the area.

Israeli tanks and troops have massed on the Gaza border, and an Israel Defense Forces spokeswoman said ground forces are prepared to enter Gaza when they receive orders to do so.

The geographic area covered by the word “region” was not defined.

SabahBlog has located a copy of previous Israeli dob-in-a rocket-firer propaganda leaflets and has a novel idea for action by peacemakers everywhere.

In 2005, Israel was condemned by Amnesty International for multiple war crimes. No punitive action was taken against the psychotic Zionist entity by the international community then, thus we can expect more of the same atrocities if it invades this time. 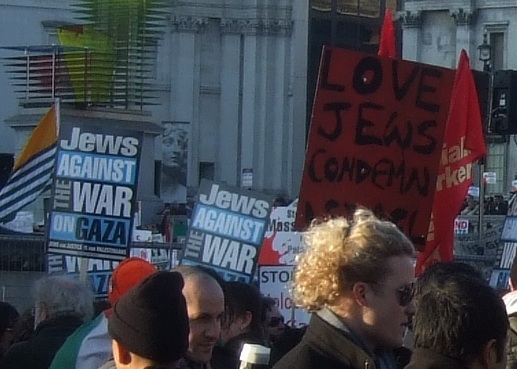 As people around the world demonstrate against Israel’s war crimes – 1000 shoes have been thrown at the gates of 10 Downing Street – Bush, a war criminal himself for lying the US into the Iraq war and for condoning torture is as usual Israeli occupied territory in his last days in power :

“America’s objectives in the Middle East will remain clear: We seek security and peace for our allies, the free people of Israel. For the Palestinian people, we seek a peaceful and democratic Palestinian state that serves its citizens and respects its neighbors. For all in the region, we seek an end to terror.”

The comments reflected the general tone that the U.S. has historically taken toward Hamas, which the United States and the European Union consider a terrorist group.

In democratic elections in Palestinian territories backed by the United States in 2006, Hamas won a landslide victory in parliamentary voting.

After the elections, the U.S. government asked the Palestinian Authority to return $50 million in donations for infrastructure improvements. The United States cut off direct, nonhumanitarian aid to Gaza but more than doubled humanitarian aid it funnels through non-governmental groups and the United Nations.

Mahmoud Abbas, president of the Palestinian Authority and a member of Hamas’ rival Fatah party, dissolved Gaza’s Hamas-led government and declared a state of emergency in 2007. Hamas took control of the territory shortly afterward.

Abbas was to travel to New York on Friday to address the United Nations Security Council, his office said.

On Wednesday, the council debated a Libyan-sponsored draft resolution favored by Arab countries that calls for Israel to immediately cease military attacks against civilians and asks for the protection of the Palestinian people.

The United States indicated that it does not back the resolution, though it does support a cease-fire.
advertisement

Rice said Friday that a “durable and sustainable” cease-fire was needed to end the violence in Gaza and in southern Israel.

Seems Abbas is waiting in the wings – soon it will be his turn to be played as a puppet at Israel’s convenience. How long before Israel decides he too is an unsuitable ‘partner for peace’?