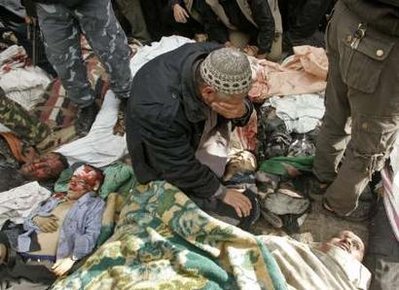 Bombs are raining down on Gaza. In that tiny, densely populated strip of land on the Mediterranean, under merciless siege for the past 18 months, there is nowhere to hide, no sophisticated air raid shelters or safe zones. When the chilling phone call comes from the Israeli psyops that one’s home is near a target, there is nowhere safe to go. The initial Israeli attack however was reportedly a surprise.

It is well worth considering that 55% of the 1.5 million Gazan population are under the age of 18. Israel has killed 31 children and wounded 140 thus far in the past 4 days of its pogrom from a total 375 people killed and counting.

Israeli politicians and their complicit foreign muppets coldly bleat about how Hamas must stop its barrage of homemade rockets which have killed 4 people during Operation Cast Lead.

During the last seven years, 14 Israelis have been killed by mostly homemade rockets fired from the Gaza Strip, while more than 5,000 Palestinians were killed by Israel with some of the most advanced US-supplied armaments in the world. And while no rockets are fired from the West Bank, 45 Palestinians have died there at Israel’s hands this year alone.

Yet Israel refuses to seek a truce – they have more killing in mind and a powerful military funded gratuitously with yankee dollars with which to accomplish their goals.

Are they are enjoying this slaughter, this reenactment of the Shoah which was visited upon them long ago and with which they have threatened the people of Gaza this year? Will they stretch out their criminal collective punishment of the Gazan people until that mindless fool Bush is out of office?

How does Israel benefit from its vile acts of genocide? As Johann Hari accurately comments (the whole story is essential background to the current disaster):

Before it falls down the memory hole, we should remember that last week, Hamas offered a ceasefire in return for basic and achievable compromises. Don’t take my word for it. According to the Israeli press, Yuval Diskin, the current head of the Israeli security service Shin Bet, “told the Israeli cabinet [on 23 December] that Hamas is interested in continuing the truce, but wants to improve its terms.” Diskin explained that Hamas was requesting two things: an end to the blockade, and an Israeli ceasefire on the West Bank. The cabinet – high with election fever and eager to appear tough – rejected these terms.

The core of the situation has been starkly laid out by Ephraim Halevy, the former head of Mossad. He says that while Hamas militants – like much of the Israeli right-wing – dream of driving their opponents away, “they have recognised this ideological goal is not attainable and will not be in the foreseeable future.” Instead, “they are ready and willing to see the establishment of a Palestinian state in the temporary borders of 1967.” They are aware that this means they “will have to adopt a path that could lead them far from their original goals” – and towards a long-term peace based on compromise.

The rejectionists on both sides – from Mahmoud Ahmadinejad of Iran to Bibi Netanyahu of Israel – would then be marginalised. It is the only path that could yet end in peace but it is the Israeli government that refuses to choose it. Halevy explains: “Israel, for reasons of its own, did not want to turn the ceasefire into the start of a diplomatic process with Hamas.”

Why would Israel act this way? The Israeli government wants peace, but only one imposed on its own terms, based on the acceptance of defeat by the Palestinians. It means the Israelis can keep the slabs of the West Bank on “their” side of the wall. It means they keep the largest settlements and control the water supply. And it means a divided Palestine, with responsibility for Gaza hived off to Egypt, and the broken-up West Bank standing alone. Negotiations threaten this vision: they would require Israel to give up more than it wants to. But an imposed peace will be no peace at all: it will not stop the rockets or the rage. For real safety, Israel will have to talk to the people it is blockading and bombing today, and compromise with them.

The sound of Gaza burning should be drowned out by the words of the Israeli writer Larry Derfner. He says: “Israel’s war with Gaza has to be the most one-sided on earth… If the point is to end it, or at least begin to end it, the ball is not in Hamas’s court – it is in ours.”

The last thing Israel has ever wanted in its blighted, ugly existence is peace – it has proved this time and time again. Until it has expropriated all it wants from the Palestinians, it is in the interests of the Zionist enterprise to divide and conquer using Hamas and Fatah as pawns, manipulate international opinion, run a concentration camp in Gaza and get away as it usually does with endless bloody murder.