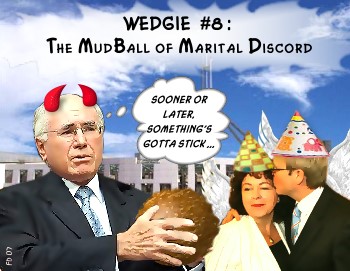 With the latest disastrous poll results, in ruthless, churlish desperation, the rodent chucks a dirty wobbly at Kevvie and his missus, which they fortuitously duck. Has the rodent prematurely shot his load, or are there other greeblies awaiting?

Peter Dutton feebly attempts to compound the mudball, bleating that

How dare Kevvie suggest that women aren’t just appendages of their husbands.

Naturally, as evidenced by Costello’s continued emphasis on increasing the population and rewarding Asstralia’s breeding stock, the Rat Pack needs more women to stay at home to do their national duty to breed more work slaves for the elite rather than succeeding in their own right in the still male-dominated world of business.