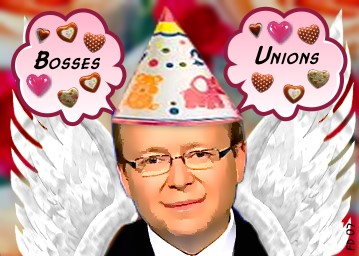 Electorally, Rudd’s IR announcements at the National Press Club luncheon today seem likely to appeal, with the critical reactions from union spokespeople adding a vital touch of concern which will assist in delineating the ALP from the unions, avoiding the usual rightard criticisms of the ALP being in the unions’ pocketses. Cleverly, Kev emphasised his primary responsibility to the economy.

“Industrial disputes are serious. They hurt workers, they hurt businesses, they can hurt families and communities, and they certainly hurt the economy.”

“We are of course waiting for the details but this is a good start.”

Which issue will take centre stage at the ALP conference? U or IR? Kev expressed confidence that his IR policies would be endorsed by the 400 delegates.

With the polls showing Labor is increasing its comfortable lead, with the primary vote 50/35, on a two party preferred basis 59/41 and best prime monster 48/36, Team Rodent is looking more and more likely to be waving desperate huge bribes and tax cuts to all us Joe Blows in the May budget.