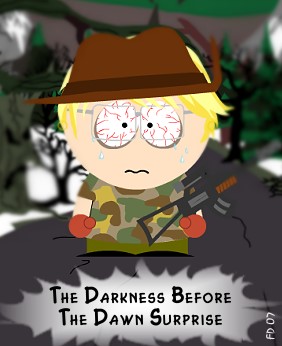 Talk about making a mountain out of a molehill. Kevvie’s staff stuffed up with their tasteless Sunrise pre-recorded Anzac dawn service plans – yet unlike Johnny, Kevvie takes stumbling responsibility. Surely the stress of leading the ALP into an election isn’t getting to him already?

The SMH describes the kerfuffle kindly:

The tawdry plans to stage the pre-dawn service at Long Tan so as to coincide with peak ratings in Australia may not have been hatched by Mr Rudd, but he suffered because he was at the top of the bill.

We are already in the throes of a media led election as the chooks, as dear old evil Bjelke-Petersen used to call them, begin their cackling chorus. A typically preachy Australian editorial transparently berates Kevvie for favouring Murdoch rival, Stokes, and does not beat around the bush lecturing him and his office for their minor misdemeanours, whilst significantly drawing attention back to far more disturbing, heinous rodential crimes.

It demonstrates failings within Mr Rudd’s office and undermines one of Labor’s strongest weapons against the Government. That is Labor’s claim that government ministers, including Foreign Minister Alexander Downer, were negligent for not being across all the documents and details of the AWB wheat-for-weapons scandal with Saddam Hussein’s regime in Iraq. The Government’s AWB failings, which took place as the country prepared for war with Iraq, are clearly more serious, but Labor has nonetheless surrendered some of the high moral ground.

Those damn emails. We’ve had our own experience with emails to Kevvie. He needs to insist his staff at least acknowledge receipt of communications from electors. If there’s one thing voters deserve to expect from their elected representatives, it’s a response to their justified concerns.

No mention in the editorial of the rodent’s latest hideous demonstration of political abuse of the sick and vulnerable, as he jumps on the Hansonite apocalyptic, demented bandwagon, decrying immigration to Whorestralia of HIV positive folks. Why pick on them? why not keep out the fat, the stupid, the smokers and the elderly (who, if one is going to count dollar costs, drain the public purse the most) as well for consistency? HIV people with proper treatment can live long and productive lives. And with drugs heading toward production like Whorestralia’s own company, AVX with its apricitabine, it may not be long before the illness can be arrested completely.

Again the rodent shows there are no depths to which he will not stoop to gee up the worst amongst us, the braindead bigotted Jonestown goon squad.

The slimy prime miniature snatched the opportunity to capitalise on Rudd’s dawn surprise with all four paws, hypocritically slathering that Anzac Day is

… a sacred occasion and nobody should be trying to give it a political spin. 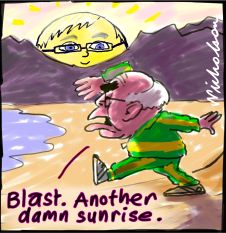 On the other hand, the hapless ailing humans who suffer from HIV are apparently fair game and legitimate pawns for the opportunistic, dishonourable rodent, for whom all’s fair in love and politics.

Kevvie is to address the Press Club today, and then fly off to present in the United Stupids. Perhaps distance will steel his resolve and return clarity – if the rodent is to be defeated, Kevvie will need his neurones firing on all cylinders. The crucial debate on the economy looms after the May budget. He might also take his cue from the above editorial and ‘feed the chooks’ – maybe someone in Murdoch’s stable is keen to dredge up the AWB disgrace again.

FRINGE NEWS UPDATE: Kevvie and Hockey conduct a tandem retreat from Sunrise. Fur to keep flying? From the SMH again:

Furthermore, this election will be fought centrally over industrial relations – Mr Hockey is the minister charged with selling the laws Mr Rudd wants to tear up.

The men are supposed to exist in a state of daggers drawn. The sight of them being matey each Friday helped Labor and did nothing for the Government.

One Reply to “Team Rodent on patrol, desperate for ammo”