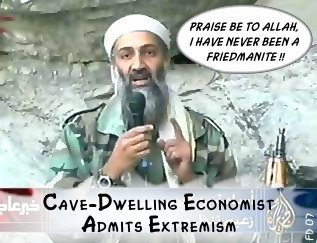 One who knows the enemy and knows himself will not be in danger in a hundred battles.

One who does not know the enemy but knows himself will sometimes win, sometimes lose.

Over recent years, there has been considerable confusion in the West about what university qualifications Osama Bin Laden actually possesses. A firm knowledge of his various expertises would seem to be of great import if his adversaries wished to benefit from Sun Tzu’s dictums.

In this interview with Robert Fisk in 1996, he says “I am a construction engineer and agriculturalist.” At that time, indeed he was. The interview does not, however, mention his educational qualifications.

Bin Laden may have studied economics and business administration[16] at the Management and Economics School of King Abdulaziz University in Jeddah. Some reports suggest bin Laden earned a degree in civil engineering in 1979,[17] or a degree in public administration in 1981.[18]

According to this story in Forbes:

Bin Laden attended the King Abdul Aziz University in Jidda, where one of his teachers, Sheikh Abdullah Azzam, would later play a prominent role in mobilizing Arab support for the Mujahedin fighting the Soviet occupation of Afghanistan. Bin Laden graduated in 1979 with a degree in economics and management.

“I studied economics at Jeddah University and I began working in my father’s company and on roads from an early age, even though my father passed away when I was 10.”

I studied economy at Jeddah University, or the so-called King ‘Abd-al-‘Aziz University.

Strikingly, an October 2001 interview illustrates Bin Laden’s knowledge of the economic impact of the 911 events on the US.

I say the events that happened on Tuesday 11th September on New York and Washington, that is truly a great event in all measures, and it’s claims until this moment are not over and are still continuing. And if the fall of the towers, with the twins on it’s head, was an event that was huge, then consider the events that followed it… let us talk about the economic claims [tadaa’iyat iqtisaadiyah], which are still continuing. According to their own admissions, the share of the losses on the Wall Street Market reached 16%. They said that this number is a record, which has never happened since the opening of the market more than 230 years ago. This large collapse has never happened. The gross amount that is traded in that market reaches 4 trillions dollars. So if we multiply 16% with $4 trillion to find out the loss that affected the stocks, it reaches $640 billion of losses from stocks, with Allah’s grace (subhannahu wa ta’aala).

So this amount, for example, is the budget [miizaniyah] of Sudan for 640 years. They have lost this, due to an attack that happened with the success of Allah lasting one hour only. The daily income of the American nation is $20 billion. The first week they didn’t work at all due to the psychological shock of the attack, and even until today some don’t work due to the attack. So if you multiply $20 billion by 1 week, it comes out to $140 billion, and it is even bigger than this. If you add it to the $640 billion, we’ve reached how much? Approximately $800 billion.

The cost of the building losses and construction losses? Let us say more than $30 billion. Then they have fired or liquidated until today, or a couple of days ago, from the airline companies more than 170,000 employees. That includes cargo plane companies, and commercial airlines, and American studies and analysis have mentioned that 70% of the American people even until today still suffer from depression and psychological trauma, after the incident of the two towers, and the attack on the Defense Ministry, the Pentagon – thanks to Allah’s grace (subhannahu wa ta’aala). One of the well-known American hotel companies, Intercontinental, has fired 20,000 employees – thanks to Allah’s grace (subhannahu wa ta’aala). Those claims cannot be calculated by anyone due to their very large scale, multitude and complexity – and it is increasing thanks to Allah’s grace (subhannahu wa ta’aala) – so watch as the amount reaches no less than $1 trillion by the lowest estimate …

We believe that the defeat of America is possible, with the help of God, and is even easier for us — God permitting — than the defeat of the Soviet Union was.

This 2005 report is pertinent:

What’s interesting about Osama Bin Laden’s most recent tapes is that they didn’t trigger debate among religious scholars but rather among Arab economists.

Unlike Western media, which focused on Bin Laden’s call on Iraqis to boycott the scheduled elections, Al Jazeera highlighted his sudden interest in economics.

Similarly, Al-Quds Al-Arabi, a London-based independent newspaper, says the latest Bin Laden tape is significant because it suggests a specific strategy to cause maximum damage to the American economy.

In the tape aired on Al Jazeera on Dec. 27, Bin Laden reiterates his call to supporters to target oil installations in Iraq and the Gulf as a way to foil American plans to control and profit from them.

And in another tape aired two weeks prior, on Dec. 16, Bin Laden uses economic concepts to explain why the price of oil should be $100 a barrel. He argues that while the prices of other commodities mainly imported from the West have multiplied, the price of oil decreased to as low as $9 per barrel in the 1990s.

The editor of Al-Quds Al-Arabi, Abdul Bari Atwan, agrees with Bin Laden, saying the United States is paying much less than the fair market value for Arab oil. He argues that the United States manipulates oil prices by decreasing the value of the dollar and pressuring Saudi Arabia into pumping more oil.

Al-Quds Al-Arabi newspaper attributed the strengthening of Bin Laden’s role to “the American bloody adventures in Iraq.” Bin Laden calls these adventures “a very rare and precious opportunity (for Arab and Muslim nations) to get out of dependency and slavery to the West.”

Yet, the above scribe appears to be unaware that Bin Laden clearly spelt out the role of economics in harming his enemy years earlier in December 2001 in an Al Jazeera interview:

With money and lives; though the gap between us and the American military establishment is very wide and our weapons do not reach their warplanes — one possibility is the use of these wide defensive lines to absorb the aristrikes. The other way is to strike at the economic base that forms the foundation of the military establishment. When their financial reserves run out, they will be bickering among themselves and refrain from the enslavement of weak nations.

I say, it is very important to concentrate on striking the American economy by every possible means.

Bin Laden points to what he believes is his enemy’s weak underbelly. Economic damage is a recurring theme in his declarations and interviews. From an audio tape in February 2003:

… America is definitely a great power, with an unbelievable military strength and a vibrant economy, but all of these have been built on a very weak and hollow foundation. Therefore, it is very easy to target that flimsy base and concentrate on their weak points and even if we are able to target one tenth of these weak points, we will be able crush and destroy them and remove them from ruling and conquering the World.

Economic boycott of the West is not possible unless economic self-sufficiency is attained and substitute products are brought out.

Again on video in December 01:

Another clear testament: the blow was against the global interest-based economy that America supports with its military force — that it uses to impose kufr (here used in the sense of evil, atheism and disbelief and immorality) and humiliation on weaker nations — that will accelerate its fall. These blessed hits have inflicted on America, by their own admission, in the markets of New York and elsewhere , a loss of upwards of a trillion dollars, by the grace of Allah Almighty.

Thus, there are ample references throughout Bin Laden’s statements and interviews to the implementation of his economics degree in warfare. Many believe he is a professional civil engineer – as he himself says, he was instructed in those skills by his father. Perhaps this skewed belief arises in part from the structural issues involved in the WTC disaster, and a perception of war being a concrete event rather than anything to do with abstract economic theory and practice. Still, Hitler was a journalist, Stalin trained to be a priest, Mao Tse Tung worked as a lowly library assistant at Peking University and Dubya has an MBA – ironically, a similar qualification to Bin Laden’s economics degree.

However, Doodoo and Osama no doubt would fail to agree on Milton Friedman’s famous aphorism:

The problem of social organization is how to set up an arrangement under which greed will do the least harm, capitalism is that kind of a system.