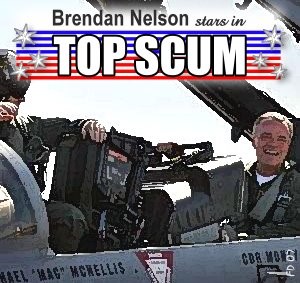 Once again, it is clear who is little Johnny’s main priority, and it isn’t the long-suffering Whorestralian people.

While the Rodent gang attack the Opposition over a mooted $4.7b spend on upgrading broadband access in Australia, including to rural areas, there has been a complete lack of fiduciary restraint on the part of Brendan Nelson in sneakily acquiring overpriced, already outdated yank military surplus to the tune of $6b. The plan has been “lashed by critics as an expensive buy”. Team Rodent’s latest fetishist foibles, the 24 Super Hornets are

designed to plug any gap in air defences that may develop between the retirement of the ageing but potent F-111 and the arrival of the fifth-generation F-35 Lightning II joint strike fighter (JSF), which Australian companies have been involved in developing.

The plan bypasses the two-pass review process introduced after the Kinnaird report on Defence procurement, with critics saying the purchase is politically motivated and inconsistent with Defence capability plans.

The Super Hornet buying frenzy is the precursor for more costly errors for Australia and windfall gains for United Stupids military corporations:

The physicist told the party room he did not believe the JSF was good enough to defeat aircraft such as the high-performance Russian-built Sukhoi Flanker fighter.

Nelson thumbed his nose at advice from Defence experts.

The Government-sponsored Australian Strategic Policy Institute suggested that rushing the purchase could cost hundreds of millions of dollars and leave the RAAF with an inferior aircraft.

When it comes to licking yankee bottom, the shameless Howard mob have no scruples about avoiding their own review processes. Bear in mind that the antiquated Super Hornets don’t generate any future income for Australia, they are an ongoing burden to the taxpayer.

Yet when it comes to investing in the Australian people and business with a top notch telecommunications infrastructure which will make us globally competitive, generating income, taxes and jobs, the Howard mob hypocritically say it is raiding the cookie jar.

Estimates of economic returns on broadband investment are very encouraging. They could add

up to $30 billion to the economy and deliver a rise in productivity by improving efficiency and creating new products and markets.

Australia is lagging way behind:

The Reserve Bank has warned that boosting infrastructure will be a key to raising the capacity of the economy without putting pressure on inflation.

The Organisation for Economic Co-operation and Development found Australia ranks 17th out of 25 nations with basic broadband at a speed of 256 kilobits per second. The proposed high-speed fibre networks would deliver 10 megabits of data per second.

The federal Government’s Broadband Advisory Group, which has set the template for the development of private sector, government and Labor policies over the past three years, said the major themes to emerge from its research was “the great potential of broadband to boost economic growth and the importance of a co-ordinated national approach to broadband connectivity”.

The group estimates the next generation of broadband could produce economic benefits of $12billion to $30 billion a year if broadband becomes as common as the telephone. The advantages for small business are regarded as considerable, in a world where global supply chains mean that access to broadband is essential to sell products and ship them to intermediate and final producers.

Telecommunications stocks rose 2% today regardless of Costello’s childish tomb raider rant. Perhaps he has forgotten that it was he who raided our treasures and sold off 167 tonnes of Australia’s gold reserves at ridiculously low prices in 1997.

The exit was stealthy, with all of the gold sold over a six month period without anyone outside the walls of the RBAâ€™s headquarters in Sydneyâ€™s Martin Place told about the dramatic shift in national financial reserves. When the sales were announced it was fait accompli. The prices received were said to have varied from US$335 an ounce to US$360/oz, with the average assumed to have been US$350/oz.

Costello glibly told the world that â€œgold no longer plays a significant role in the international financial systemâ€.

What a moron. Why would anyone trust this reprobate with our assets?

What return did we get on those gold sale proceeds since then? you can safely bet we would have done far, far better retaining our gold reserves, considering the stellar rise in the POG since. Supposedly, we have 80 tonnes left, an absolute pittance.

In nailing him to the boards, we must not forget Costello’s other ludicrous folly – the cross currency exchange debacles.

Since coming to office, Costello has presided over realised losses of $1.9 billion between July 1996 and July 2003 on currency swaps.

What has happened under Costello’s watch is a major financial disaster. Even so, the Government has failed to provide a proper account to Parliament explaining how the losses occurred.