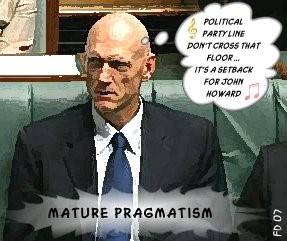 What a sensational, vicious week of chess it has been in the Australian parliamentary realm! The difficult Australian/US alliance, a balancing act every Australian prime monster has to handle, has remained in the spotlight. Why some pms feel the need to grovel to US presidents more than others is certainly an interesting phenomenon. Johnny has out-crawled all his recent predecessors, degrading our nation’s dignity and relationship with the world.

Over his insensitive Obama attack, Johnny was stoushed by Kevvie, and the world remembered Australia, marvelling at the socially divisive yobbo who heads it. Johnny fired back at Kev with one of his classic wedgies as he revealed the secret new US joint facility base at Geraldton, perhaps expecting to expose Pete as the Labor weak link because of his ‘idealistic’ anti-base youth.

Pete stonewalled, adroitly referred the issue to the appropriate portfolio, and drew the debate back to *his* portfolio and Johnny’s soft underbelly – climate change. From the point of view of a committed environmentalist like Pete, the urgent need to rid the nation of the environmentally irresponsible, corporate-lackey Howard mob through the only viable, political alternative would be paramount, and the abandonment of other principles, for the time being at least, a small price to pay.

(The ALP is organising a National Climate Change conference for late March/early April – prior to the National ALP Conference in April, where the 3 mine policy may change. We’ll be keeping a close eye on the climate change proceedings.)

Smoothly, Kevvie again took up the cudgels, presenting an alternative Iraq withdrawal plan that fits snugly with the now-dominant US Democratic party position. Projecting an image of personal integrity and Australian dignity to match his vision, he said:

“Of course we’re going to have a difference of view with them. I understand that and I don’t for the moment pretend that the Americans would welcome our policy on this question.

I understand that, but my first responsibility is not simply to comply with every element of US foreign policy, my responsibility is to say on certain areas, we are going to disagree, and have the courage to do so.”

Kev’s stance is likely to resonate well with voters, particularly considering the lack of support Australians have had for Australia’s participation in the illegal Iraqi debacle from the start. It should also go down well with Americans who at last are rejecting Dubyah’s fearmongering in droves. With a Democratic president, and specially if it’s Obama, Howard is likely to be a serious liability for the US/Oz alliance.

Despite Johnny’s shameless grovelling, Doodoo has decided Australia is not a suitable recipient for United Stupids’ F-22s, the world’s most advanced and expensive warplane. Maybe Doodoo wasn’t impressed by those rocket launchers going missing, some of which *still* haven’t been found. Considering those shoddy Collins subs and Sea Sprites, it’s probably best we didn’t get the F-22s anyway.

To top things off this week, Johnny hid behind Helen Clark’s skirts as the NZ press dogged him about his disgraceful onslaught on Barack Obama, from which he still refuses to resile.

SCOOP MEDIA:
Is it your job to protect the Australian Prime Minister from answering questions from the New Zealand media?

NZ PM HELEN CLARK:
I’m sorry. You continue to heckle from the back row of every news conference that I give and you’re not going to do it to this one. So I think we will be taking our leave.