In which direction is the girl spinning, anti-clockwise or clockwise?

Can you make her spin in both directions?

This dichotomous animation seems analogous to the shameful assassination of Benazir Bhutto yesterday. Depending on the observer, she either died from banging her head on the car sunroof, or she was shot, whilst depending on the mouthpiece, her assassins were either Al Qaeda fanatics or Musharraf supporters.

Pakistan is certainly reeling at present. Benazir’s calm resolute attitude and determination to steer the country toward democracy in the midst of impoverishment and ignorance was an inspiration. Her sainthood just might do the trick.

Bilawal takes up the cudgels on behalf of his mum – ‘democracy is the best revenge’. Take that, you dictator Musharraf. Yet in a country with minimal availability of decent education unsoaked in religious twaddle, democracy has poor soil in which to flourish. Religious madrassahs are often the only option for non-city Pakistani youth to obtain any education whatsoever. The other essential components for democracy … a free parliament and judiciary are lacking, whilst the last, a free press, like education, is limited to city areas. Musharraf has kept an iron lid on the god botherers whilst benefiting from their implementation of primitive teachings to keep the people ignorant and impotent, and the country destabilised.

â€œI contend that we are both atheists. I just believe in one fewer god than you do. When you understand why you dismiss all the other possible gods, you will understand why I dismiss yours.â€

The poised, dry-witted Julia Gillard has made history, becoming the first woman in our country’s top job. She will be Acting PM for two whole days whilst Kevvie is at the Bali climate change conference.

Julia’s achievements represent a triumph of reason against far right losers who have in the past projected their perverted mental and social retardation in criticising Julia for being barren and single, i.e. an ‘unnatural’ being.

Taking their idiocies with a grain of salt, Julia says:

I think what we’ve got to recognise is that whether it’s men or whether it’s women going into politics it brings a lifestyle strain … I’ve had people literally screech to a halt next to me in their car when I’ve been wandering along the street, women winding down windows screaming out of their car, ‘If you want some kids you can have mine’, and I’m not sure they were talking about a short-term lend.”

She has taken on the combined portfolio, Employment and Workplace Relations and Education in addition to her acting PM and Deputy PM roles.

We wouldn’t be at all surprised if Julia became the next Labor PM, she has the goods, and in our opinion would make a better job of it than anyone else with her down to earth common sense, decency and honesty.

After more than a century of determined effort by the first women suffragists and following activists, feminists and supporters working to elevate women’s opportunities in Oz, we can all pat ourselves on the back – and there’s no going back now. You’ve come a long way, baby!

Kerry O’Brien’s delightful gaffe that there was ‘a swing to the ABC’ in Bennelong aroused our elated mirth at the woes of the rodent as the eloquent and lovely Maxine McKew looked poised to take his seat. The presence of the Chaser team in the outer election commentary area and prior interview of a non-committal Craig Reucassel had perhaps influenced his thoughts.

For the government under Rudd will be certain to attend to the needs of our ailing dear Aunty, debilitated by the mercantilist, corporate media influenced, wowserish rodent pack. Essential to the health of our similarly diseased democracy, our ABC is headed for better days.

Around the nation as the landslide results became clear, the joy was palpable. We were swilling our third bottle of pink champagne by the time Howard belatedly conceded defeat, advertising as he did so from the podium sticker that he was beholden to Sofitel Wentworth, in probable future Lieberal leader, Malcolm Turnbull’s electorate, for their hospitality to his wake. His farewell speech was lengthy, pompous and whiny, the gluttonous prime miniature scraping the barrel for the limelight he has craved to the detriment of his own party.

A 6% swing against the Lieberals with the loss of 26 seats so far and Howard likely to lose Bennelong mean the wolves will be feasting on dwarf carcass for some time. 88 Labor seats are predicted at this stage. We are pleased that Fringe readers were perspicacious, with 82% polling Team Rodent would lose.

Good riddance, little Johnny, and may you slink away from public life completely, not to reemerge in the form of a vocal statesman like your more admirable counterpart, Malcolm Fraser. And farewell, Costello, always a bridesmaid and never a bride, your career tainted by rodent droppings and a general lack of guts and ambition. We will never forget how you sold off Whorestralia’s gold reserves BEFORE the gold boom, or removed capital gains tax for foreign investors whilst offering no such relief to us locals.

Rudd’s victory address was littered with painful slogans, directed at the average yob who will today be examining their assets and debts in light of more imminent interest rate rises. Yet at least, Whorestralia can now revel in the fact that we can as a nation participate in enlightened ventures like the signing of the Kyoto treaty, removing our soldiers from Bush’s sordid Iraq debacle and repairing the public health and education sectors. All worthy of foregoing tax bribes for!

The restoration of Whorestralian workers’ protections and rights may have to wait till next July, when the Senate will fall to a Labor majority, though we would not be surprised if the some of remnants of the imploded Lieberals turn tail on their former dearly beloved dwarf leader’s draconic industrial policies.

Good luck to you, Kevvie … and keep the light shining. Breathing multiple sighs of relief, we won’t have to leave the country in disgust after all. 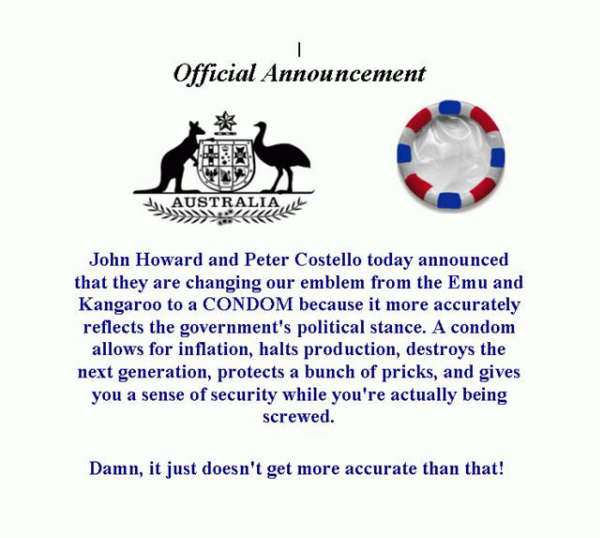