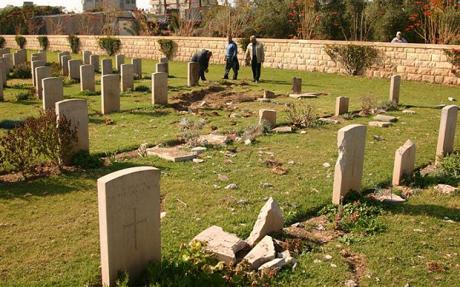 Is someone telling porkies or does the Department of Veteran’s Affairs attention lapse during the Parliamentary break?

And what of the priority given to the desecration of digger war graves by @KevinRuddPM and @TurnbullMalcolm, who were informed via Twitter on January 22 of the event in a UK Telegraph story. I also noted the event on on this blog at the time.

Representatives of the Commonwealth War Graves Commission expressed their “distress” after The Daily Telegraph sent them photographs of the latest damage at Gaza War cemetery.

The damage is much worse than that caused by Israeli forces in 2006 in an incident that briefly soured British-Israeli relations and led eventually to the Jewish state paying £90,000 in compensation.

A commission spokesman said a full damage assessment would be made as soon as it was once again safe to visit the site, which is north and east of Gaza City.

The Daily Telegraph found at least 287 headstones were damaged, some shattered beyond repair, as the cemetery was hit by at least five Israeli shells and its grass singed in places by white phosphorus.

It is believed at least one unexploded shell is still under the soil at the cemetery, meaning no visitors can be allowed until it has been dealt with.

The staff who tend the cemetery, normally an oasis of calm and well-maintained order in the otherwise chaotic Gaza Strip, had to flee for their lives.

“I sent all the others away because the shelling got too heavy,” said Ibrahim Jerradeh, 71, who was made MBE after tending the grave since 1958.

“Only when it got really close and started to hit the cemetery did I leave.”

“There were no people here, just graves, so why does Israel fire on this place?” he said.

“It is just a graveyard for all people, why cannot Israel respect that?”

The Israeli spokesman dissembles, blaming a Hamas ‘weapons cache’ for the damage – this is dissonant from both the photo and eye witness account of the MBE honoured Ibrahim Jerradeh. Perhaps the ‘unexploded shell’ will provide further evidence of the culprits.

Apparently neither the Prime Minister or Opposition Leader of Australia, despite their continual public adulation of the Australian defence forces, could be bothered to check the Twitter link they were sent, or if they did, to pass it on to the relevant department. One wonders whether the Commonwealth War Graves Commission contacted the DVA soon after the event. I now read today in a Herald Sun ‘Exclusive’ that:

THE graves of at least 10 Diggers were damaged – possibly destroyed – during recent fighting in the Middle East.

The graves were among about 300 hit in the Gaza war cemetery during clashes between Israeli and Hamas militants.

Australian authorities learned of the damage only this week – more than a fortnight after the fighting ceased.

The cemetery contains 3217 Allied war graves, including those of 264 Australians killed in both world wars.

“Any damage to our war graves is distressing,” Mr Griffin said.

“At this stage we have no further information about the nature of the damage.”

The Israeli Defence Force said it had not shelled the cemetery during its 22-day assault on Gaza.

It blamed the explosion of a weapons cache during its attack on a nearby Hamas position.

The General Palestinian Delegation to Australia, which acts as a de facto embassy, said it was unaware of the incident.

RSL national president Bill Crews said he was disturbed by the damage but believed it was unintentional.

“Our Commonwealth war graves have been broadly respected by all people living nearby,” Maj-Gen Crews said.

He hoped the graves were restored to their original condition as soon as possible by the Commonwealth War Graves Commission. The commission said some Allied headstones were completely shattered.

“Preliminary reports suggest a significant number of headstones have been damaged, some beyond repair,” it said. 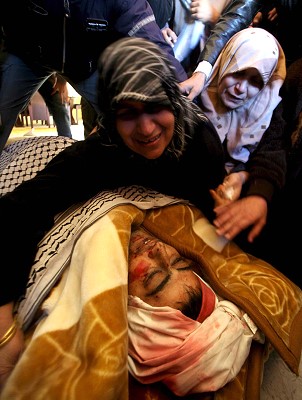 Are the Israelis trying to get out of paying for the damage this time?

Israeli embassy spokesman Dor Shapira said Israel had the greatest of respect for the integrity of Allied war graves.

“The embassy is very sensitive to the matter and is giving it the utmost care and consideration,” he said.

“The embassy is currently in contact with the relevant authorities in Jerusalem in order to get a full understanding.”

he is deeply distressed by the news and is seeking more information from the Commonwealth War Graves Commission.

Mr Griffin says there has been extensive damage to about 300 Commonwealth graves in the Gaza cemetery.

He says the Government has not yet decided whether to make any formal representations to the Israeli Government or the Palestinian authority about the damage.

“The focus at the moment is to ensure that we get the repairs done and make sure that this cemetery is returned to the dignified status that these lost soldiers deserve,” Mr Griffin said.

Let’s also make sure the villains pay for their vandalism.

For those who would like some comprehensive background information on the Israeli occupation and the suffering of those who live under it, visit Open Anthropology for the documentary series. The site also offers the documentary “The Iron Wall, which explores Israeli colonialism