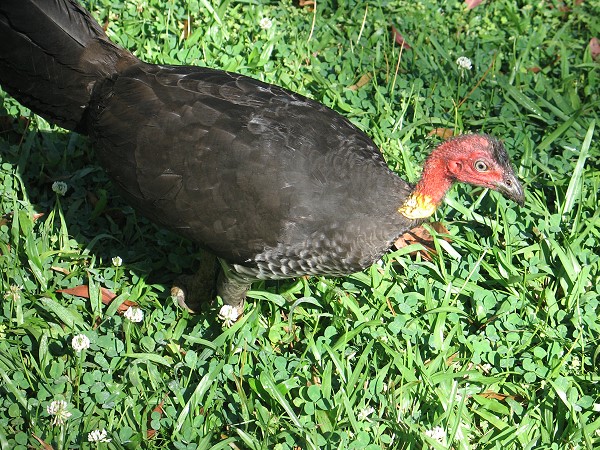 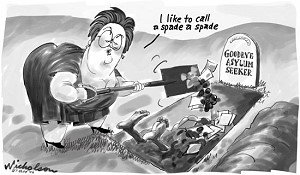 (Disclaimer: Any resemblance to any person live or dead is probably deliberate.)

Let’s face it, we moved north because, despite the excruciating lack of Culture with a capital C, it was cheaper to live in the sunshine without those crippling heating bills and astronomical inner city rents. Jim was offered a better job and the kids loved going to the beach more often than once a year when we stayed with grandma at Bondi.

Pretty soon we put a deposit on an attractive house and land package at Bribie Island and settled into coastal suburban mortaged bliss. Then one day our average aussie lifestyle lost the plot. As we careened into the unknown, we had no idea that things would get so out of hand.

I’d always been a dreamer, and my friends, who I could count on one hand, thought I was weird … she’s the odd one who reads books and mutters to herself, I heard them saying.

So I didn’t tell them about my dreams, which unlike theirs, about which they chattered drearily, weren’t about new washing machines, trendy clothes and toffee nose private schools for the kids.

When Jim brusquely informed me he would be working weekends from now on, I asked him how the hell he’d bargained away his time with the children.

‘It was go for an individual AWA or retrenchment. They didn’t so much as say it but everyone knew what they meant. If I don’t cop it sweet, I’ll lose my job for sure. But the pay is better’. He winced and glanced at me hopefully.

The company needed that production line running full tilt all weekend or its economic viability would be threatened by overseas competitors – like China, India, Taiwan, Indonesia, Korea and all the other sweatshop nations. I couldn’t understand it, those mind-bogglingly expensive TV ads the government ran for months on good old Aunty ABC said it was against the law for employers to sack their workers for objecting to AWAs so I belaboured Jim till my jaw hurt.

What the hell was he thinking? To help pay the mortgage, I worked three days a week part-time while Billy and Megan were at the local state school. So why did we want any more money? I nearly hit the roof when I worked out after tax we’d end up with only $10 more a week under the new weekend work arrangements.

And I’d be lumbered with parental duties seven days a week.

Jim wouldn’t change his mind. I reckon he’d lost that ability years ago after he was offered and accepted a supervisory role on the factory floor. Yet this was the guy who’d gone out on strike a couple of years before to protect all the shift workers’ holiday pay.

After a few months, our marriage teetered, wobbled and then fell off the brink. Jim took to going to the pub after work. Some drink to remember, some drink to obliterate.

Jim was the latter. I had to do something. I took to the internet and found other mums, wrote long nasty diatribes on blogs, newsgroups, chatrooms and guestbooks to vent my fury. The kids would come home from school and find me tapping away, tapping away. I wrote letters to the editor, the federal member, the state member, senators, the ombudsman, anyone I thought might annoy the unfeeling ghouls I felt were responsible for my family’s predicament.

One evening when he finally reeled in, Jim told me about his affair with the slim blonde in the next workshop. I remembered what my mum had said. Don’t have kids unless you can support them yourself, without a man.’ I’d made my bed and would have to lie in it, with all four tons of bullshit.

So after the kids were in bed, there I’d be, writing stories about my life, imaginary lives, escapist tales of passion and adventure, with slim brunettes, redheads AND blondes, swept off their tiny feet by handsome mysterious rich men. A chance meeting with a woman who had a publisher mate turned up trumps. When my first book was accepted, I celebrated alone. After my fifth book won a major prize, people started to take notice of me, the pissed off single suburban mum from Bribie Island.

Billy and Megan were installed in a ‘good’ private school while I revelled in sumptous book tours arranged and paid for by my publishers.

With my do-it-yourself personal success guide I hit the mother lode and was presented with a top Queensland Rotary award for my contribution to Australian small business by none other than the Prime Minister’s wife.

I’m not surprised she ignored me afterwards. In my caustic speech I thanked her little Johnny and his frantic feudalisations for my success.

As I chuckled with snide, self-congratulatory glee at my hard won awards and comforts, I felt a rough hand shake my shoulder. 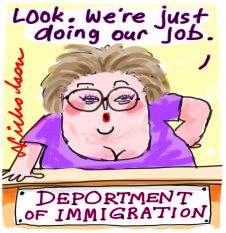 Heavens to betsy, it was Costello.

‘Get on the floor and present your speech supporting the IR bill before the Speaker notices your daydreaming! The opposition are already sniggering,’ he hissed. He looked like death warmed up after a week in a septic trench, all slime and pudge.

‘Huh …guh… ughh’, I spluttered. Cunningly I feigned correction of a few stray stiff tendrils bristling out of the steel net that was my perm, or rather, I should say, my wig. My habits of late catching up with me, I was too over-enthusiastic in my cover-up … and horrors, it fell off! Was this the real dream?

‘The members will resume their seats!’ the speaker snarled at the left bench who it now seemed, were guffawing helplessly at none other than me. This was better than Fraser dropping his dacks.

Why had things gone so wrong?

‘The Pacific solution has been an outstanding success …. ‘

‘Wrong speech, you silly fat cow’, a backbencher cackled. I girded up my considerable, intimidating loins and lambasted onwards.

‘Urr, while Labor pretends to be the party of the workers, the unemployed and the poor, it’s time for a reality check.’ Yes, that was the speech. The poor, desperate sods on the left were already settling back into their crosswords.

‘But you can look at the real things that affect real people. Can they afford their mortgage? Can their kids get a job? Now we don’t believe in sound economic management just to please some ideologies or to please academics or commentators, we believe in it because of the real difference it makes to real people.’