Worn names traced in spider silk
scratched by some rough implement
Abiding solitary witnesses
To a century of bush sanctuary.

Jeff Sparrow examines some parallels and crossovers between the disgusting US Jim Crow and similar, even worse practices in Australia

Hey look over there!
the shock jocks screech
roll up, roll up, punters
at today’s imperial circuses
Cecil the lion is sacrificed
on millions of web pages
may the dentist be devoured!
all together, outrage!
(slash the minimum wage
there’s a TTIP to push through
rotten Bouffant Bronwyn’s
helicoptering soon forgotten
no need for scrutiny by you).

I stand with Adam Goodes
and cheer his imaginary spear
in the arena of discontent
where all the rules are bent
a lawyer sneers at racist masses
in Murderdoch’s business rag
the ruling class has free passes.

The New Imperialism of Globalized Monopoly-Finance Capital
Fascist Ideology of the Self: Mailer, Rubin and Hoffman
The “lawyer article” referred to in the poem.

At present, Ali Abunimah is in France, speaking in Paris, Bordeaux, Montpellier and Lyon, marking 10 years since the advent of the 2005 BDS call and “the first anniversary of the beginning of Israel’s 51-day assault on Gaza that killed more than 2,200 people and devastated the territory”.

Ali Abunimah speaks on why there has been no reconstruction in Gaza, about the total impunity Israel enjoys, highlighting that there are no consequences for Israel’s continued blockade because of almost no pressure from outside world.

Here’s some points which Ali made in the interview.

“It’s very easy to criticise the inmates of a prison for their behaviour within the cell.”

“As there has been no reconstruction, many Palestinians have died in the Mediterranean trying to flee the devastation in Gaza.”

“People say “you should not launch rockets” …the point is that particularly Europe, is treating Palestinian resistance as if it’s illegal.”

“The point I’m making is that when you talk about a people living under occupation as ‘terrorists’, and you greet the occupiers, the oppressors, at the Elysees Palace or in Buckingham Palace, you are sending a moral message that occupation and apartheid is OK.”

“The reason Israel is talking about the boycott, divestment and sanctions movement as a strategic threat is because Israel recognises that the movement pushing for equality, for a fundamental change, is going mainstream.” 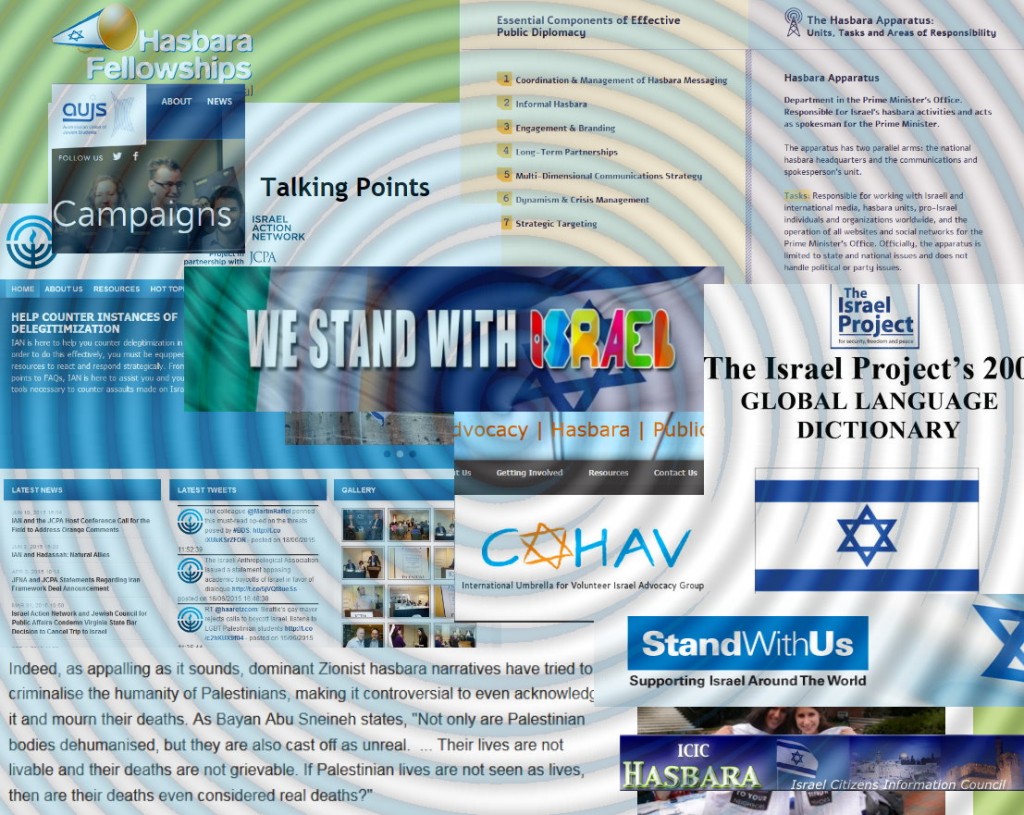 And he bored us a lot
and he had a job
of selling lies for Israel
to cover up its crimes.

and he bored us a lot
and he had a job
of selling lies for Israel
to cover up its crimes.

The elevation of an Israeli minister to deal specifically to BDS is a clear signal that Israel regards BDS as a significant threat to its apartheid, violent oppression of Palestinians.
New funding for hasbara:

“In addition, as Hasbarah Minister, Erdan will be given 100,000,000 shekels ($25.7M) in his first year of office exclusively for coordinating international events to counter the Boycott, Divestment, and Sanctions (BDS) movement against Israel. ”

Lapkin’s turgid asseveration trots out the current hasbara talking points and attacks the left, BDS and antizionists who oppose a racist Jewish state.
Omar Barghouti:
‘Netanyahu has declared, in effect, that BDS – the Palestinian-led movement of boycott, divestment and sanctions – is the new Iran.’
Israel’s latest hit mission against divestment on campus – intimidating pro-Palestinian students and threatening their careers. Israel sure knows how to delegitimise itself.
Ali Abunimah exposes Beinart’s hypocritical lib zio hasbara.
As if Ynet hasn’t donated itself as a mouthpiece for scurrilous Israeli regime propaganda forever.
Hasbara directed at fundamentalist Christians

“While the global, Palestinian-led BDS movement for Palestinian rights has proven to be a truly tough challenge for Israel’s regime of occupation, settler-colonialism and apartheid, we think there is substantial exaggeration in the recent panic-driven, racist and patently propagandistic Israeli attack on the movement.”

Adelson described three components of his Campus Maccabees concept: donors who will fund the operation; activists on the ground willing to take the fight to the campus; and researchers who will supply information about the anti-Israel groups and recommend possible legal avenues to block their activities.
Perpetrator of multiple war crimes, Elliott Abrams, pushes dirty propaganda against BDS in Newsweek
Decode the US hasbara against BDS
Current StandonUs team from the organisation that brought you pepperspraying of JVP members, portraying themselves as victims
Liberal zionist hasbara: Zonszein attempts to blame BDS for stifling of dissent in Israel.
Peter Beinart trounced by Yousef Munayyer in debate. Liberal zionism is yet again revealed as an immoral, undemocratic ideology.
South Africa’s “finest young leaders” invited on Israel lobby junket
‘Gerald Steinberg, founder of NGO-Monitor, a group that tracks anti-Israel activity of Israeli non-profits including Breaking the Silence, told TheBlaze Sunday that “any credibility given to Breaking the Silence is another blow to Israeli perceptions of the U.S.”’
Zionist AMCHA Initiative group fails to have a student-led course on the history of Palestine at the University of California at Riverside (UCR) shut down
Israel’s mockery of foreign war correspondents backfires
Hasbara and the Case for Cultural and Academic Boycott of Israel
Israeli government reps spying on activists at conferences
Israel has a long-standing policy of using cultural events to burnish its international image.

“We are seeing culture as a hasbara tool of the first rank, and I do not differentiate between hasbara and culture,” Israeli foreign ministry official Nissim Ben-Sheetrit explained in 2005.