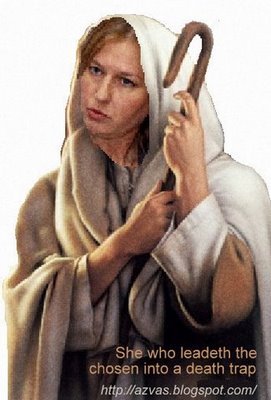 The cruelty continues … here’s the Situation Report from the UN Office for the Coordination of Humanitarian Affairs for the 5th January, 2009. Israel’s callous disregard for its civilian population, for it is the responsibility of an occupying force to provide for the civilian population of the country which it occupies under the Geneva Conventions, is biblically wrathful in its proportions, psychopathic in its methodology. Tipsy, with her hard lips sneering, flips her ratty blonde bob and claims there is no humanitarian crisis. Perhaps she thinks Palestinians are not people, so therefore, no crisis. The world will never forget this craven monstrosity, Israel, you can bet your bottom shekel on it.

Barak, Olmert and Tipsy with their murderous accomplice, Bush and his Israel First cabal, are deliberately breeding terrorism for their future sport before us – for these political sociopaths need enemies to blame, to fight, to control, to ensure future weapon sales, and above all, as a means to retain stolen territory. They rely on the rivers of anger and grief which surely will come from the Palestinians to fuel another war, to create new demons to justify another military campaign for treasure and power in another month or year or more. Pestilent political vampires, they feed from the misery of the downtrodden, the dispossessed, the wretched of the earth. We should all say together, no more, and refuse to allow them to divide us, there is enough for all. Then these perverse parasites could no longer feed from the disparity between humans.

The Israeli military operation has entered its tenth day, with the population of Gaza bearing the brunt of the violence. Israeli ground forces are currently deployed around the large Palestinian population centres in the northern Gaza Strip (Gaza City, Beit Hanoun, Beit Lahiya, and the Jabalia Refugee Camp), eastern Gaza Strip, between the Gaza governorate and Middle Area, and in southeast Rafah.

Gaza is now divided into two sections with internal movement within the Strip extremely dangerous. It is increasingly dificult for humanitarian staff to distribute aid or reach casualties. More than a million Gazans still have no electricity or water, and thousands of people have led their homes for safe shelter. In addition to the destruction of essential infrastructure including electricity, water and waste water, communications and roads, hospitals are unable to provide adequate intensive care to the high number of casualties.

The number of casualties since the beginning of the ground operation on 3 January has risen to approximately 94 Palestinians killed and many more injured. Many of the recent fatalities are women and children with entire families among the dead. This morning, an Israeli shell killed seven members of a Palestinian family (five children and their parents) in their home in the Beach refugee camp. Since this morning until 1500 hours, 25 Palestinians have been killed. The main premises of the Union of Health Care Committees in Gaza City was hit, damaging three mobile clinics and a vehicle. On 4 January, a shell struck Gaza City’s main vegetable market, resulting in five fatalities and 40 wounded. A paramedic working for the UHWC, an Oxfam-funded organisation, was killed when an Israeli shell struck an ambulance trying to evacuate an injured person in the Beit Lahiya area; another paramedic lost his foot and a driver was injured in the same incident.

MoH igures as of 1500 hours are 534 dead and at least 2470 injured since 27 December. However, the danger to medical staff and the dificulty of extracting the injured from collapsed buildings makes proper evacuation and estimation of casualties dificult. An Israeli soldier was killed on Sunday. Overall, close to 60 IDF soldiers have been wounded in Gaza since Saturday, including four who remain in serious condition. Gaza militants fired at least 45 rockets on Sunday, wounding three Israelis.

75% of Gaza’s electricity has been cut off. Since the ground operation, all Gaza governorate and most of North Gaza and the Middle Area are without electricity and there is limited electricity in Rafah, following attacks which damaged 6 of 10 power lines from Israel and one of two power lines from Egypt. The Gaza Strip is currently receiving just 25% of its total electricity need. Palestinian technicians face dificulties to reach the damaged lines because of the military attacks. Although extremely dificult for ICRC staff to move, they have managed to escort technicians to repair the damaged electricity supply lines providing electricity from Israel to the northern part of Gaza.

Hospitals are struggling to function under 24-hour per day power outages. Hospital electricity is still being provided by back-up generators and fuel for generators is precariously low. Today, generators at MoH ambulance stations, vaccine stores, labs and warehouses shut down due to lack of fuel, until UNRWA delivered fuel to the MoH. UNRWA and ICRC are working to deliver additional fuel supplies as a short-term solution.

While stabilized patients are being discharged as soon as possible to free up space in the hospitals, the Intensive Care Units (ICUs) throughout the Gaza strip are overloaded, and all ICU beds are occupied. There is an urgent need to evacuate patients out of Gaza.

Although a large quantity of medicines has been supplied by various donors and organizations, humanitarian organizations are now receiving urgent requests for strong pain killers as well as for body bags and bed sheets used for wrapping the dead. There is also an urgent need for more neuro-, vascular-, orthopedic- and open heart surgeons.

Collateral damage to hospitals is not being repaired; broken windows, for example, have not been fixed because of lack of glass. Five of UNRWA’s health centers are now closed due to hostilities nearby.

A large number of people from the border areas are reportedly being displaced deeper into Gaza as the ground operation progresses. UNRWA has now opened 11 shelters for those displaced. 5,000 persons are currently staying at them, though the number is quickly increasing. UNRWA has distributed non-food items (including mattresses and blankets) to those in need, though its stocks are quickly running out. UNRWA will increasingly need items including hygiene kits. UNRWA has also started to distribute food parcels which include bread, beans and meat.

Gaza’s water and sewage system is on the verge of collapse due to the lack of power and fuel. The CMWU warns that 48 of Gaza’s 130 water wells are not working at all due to lack of electricity, damage to the pipes and/or depleting fuel reserves on which the generators depend (suficient only for coming 2-3 days). At least 45 additional water wells are operating only partially and will shut down within days without additional supplies of fuel and electricity. Over 530,000 people (approximately 400,000 people in Gaza and North Gaza, 100,000 people in Rafah, and 30,000 people in the Middle Area) are entirely cut off from running water, and the rest are receiving water only intermittently, every few days.

The CMWU is facing dificulties to repair the damages to the networks because of security reasons. However, if the electricity was functioning, the CMWU could redirect water those people from other sources.

The sewage situation is highly dangerous, posing serious risks of the spread of water-borne disease. Sewage is looding into Beit Lahiya, farmland, and the sea, after five of Gaza’s 37 waste water pumping stations shut down due to lack of electricity. The remaining 32 stations are operating only partially and will shut down within 3-4 days unless they receive more diesel. The most dangerous problem is the wastewater treatment plant in Beit Lahiya. In addition to the risks of any strikes near the lake, the sewage level of the lake is rising by approximately 1.5 cm to 2 cm each day due to lack of electricity or fuel to pump overlow sewage from
the main lake into the lagoons. Within a week, an increase of 15-20 cm is expected in the water level, which is close to overflowing.

Food distributions continue to be dificult due to the precarious security situation. The Bakery Owners Association has 70 tonnes of cooking gas stored at gas stations near the border and on the eastern road. Access to this gas, only possible with permission from Israeli authorities, would allow them to increase the number of operating bakeries.

Movement of humanitarian aid within the Gaza Strip is dificult due to the dangerous situation on the ground. In coordination with the Israeli authorities, the ICRC is helping coordinate safe passage for a number of ambulances, a fire brigade team, GEDCO and CMWU technical staff to ensure that they are not
shelled while assisting people in need or repairing damages.

Kerem Shalom, the Nahal Oz fuel pipelines and Erez are open today. 60 truckloads of humanitarian supplies are expected to enter through Kerem Shalom. Nearly 215,000 litres of industrial fuel along with 47 tonnes of cooking gas have been pumped from Israel to Gaza but not collected due to the prevailing security situation; 100,000 litres of diesel have entered for UNRWA. Erez crossing is partially open for a limited number of medical evacuations and foreign nationals.

Rafah crossing is also open today: 4 truckloads of medical supplies are expected to arrive and 17 medical cases are scheduled to be evacuated. Medical professional volunteers (doctors, surgeons and others) from various countries are waiting on the Egyptian side of Rafah to enter Gaza to help treat injured Palestinians.

Fuel: Industrial fuel is needed to power the Gaza Power Plant, which has been shut down since 30 December. Replacement of ten transformers which were completely damaged is also urgently needed, as well as coordination to allow technical teams to ix other damages. Nahal Oz crossing must remain open as it is the only crossing which can facilitate the transfer of suficient amounts of fuel to restart and maintain operations of the power plant, and restock other types of fuel needed in the Strip.

Wheat grain, essential to provide lour for local bakeries and humanitarian food distribution to the population of Gaza. The Karni Crossing conveyor belt is the only mechanism which can facilitate the import of the amount of grain required in the Strip at this time. This crossing remains closed. Cash has still not entered the Gaza Strip and is urgently needed, including for the UNRWA cash distribution program to some 94,000 dependent beneiciaries, as well as its “cash for work” program, salaries to its staff and payments to suppliers.

@AJGaza John Ging, chief of the UN aid mission in #Gaza, warns that if the generators at Shifa hospital fail, patients in intensive care will die.